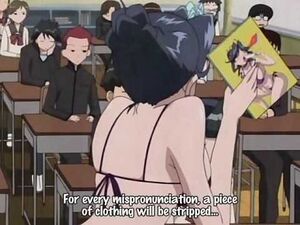 Yes folks, Mitsuka-sensei sees nothing wrong with teaching class dressed like that.

The "other half" of how Nudism is portrayed in the media, used less often than the Innocent Fanservice Girl variation—ironic, due to this being technically speaking a more realistic approximation of nudist beliefs.

This doesn't necessarily mean she prances around the streets in the nude 24/7. Perhaps she's just the type who sleeps in the nude, spends all of her private time in her house either without clothing or in just her bra and panties or only goes nude when she feels safe doing so, such as at the beach. But whatever the reasoning and specifics, the key factor is that she does understand that nudity is typically frowned upon by people... just not by her.

Her amount of consideration to people who are uncomfortable around her nudity can vary. Sometimes she will get dressed just for the sake of her house guests; other times she'll have a "screw you" attitude and not let the disturbed countenance of her house guests persuade her to stop being naked if she wants to be. It pretty much depends on what kind of person she is.

Satirical or comedic versions frequently have her facing no repercussions at all (much like her innocent sister-trope), or only comedic ones. Sometimes for extra comedic effect, her nudity will only be noticed by one person whilst being ignored by everyone else for no apparent reason. More serious portrayals will tend towards the discreet—characters that reject the taboo but otherwise do not make it an issue, or only in semi-private situations where they are within their rights to decide what to wear—or rather, what not to.

Examples of Shameless Fanservice Girl include:

Retrieved from "https://allthetropes.org/w/index.php?title=Shameless_Fanservice_Girl&oldid=1901871"
Categories:
Cookies help us deliver our services. By using our services, you agree to our use of cookies.