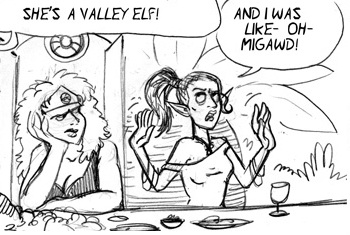 Oh my God! I am like—so totally glad to see you!

Except you. Put some pants on, already! Gross!

Like, anyway, I'm what some of you, like, call a "Stalk Parody Character", and yes, there are some totally creepy guys who—Oh, "Stock Parody Character"! I am SOOOOOO completely embarrassed! I gotta watch out for homophobes. Wait, that's, like, something else.

So if you want to, like, put someone like me in a story, you need these four totally important traits. Leave one out, and you just have some cheap knockoff of me, and that would just be, like, so tacky. Oh my God.

Okay, even though I'm best known for being from California, I can be, like, global, or something. The Valley isn't like, just in the Valley. Oh my God, was that like, totally deep or something?

Oh, and I totally know that I'm, like, not a real person in real life, or anything. I'm some kind of stereotype, you know, like parroting teens in The Eighties and The Nineties, or some junk. Sometimes people like to use me as like, an example for like, how kids don't know how to, you know, speak well, or something? And I'm also, like, intertwined with the Dumb Blonde troop now, I mean trope. And I don't care what what Mitzy Connor said, this is NOT a dye job! Puhleez!

Anyway, compare Totally Radical, The Ditz, Surfer Dude (who is, like, totally hot, could you just die?), Brainless Beauty, Rich in Dollars, Poor In Sense.

Also, totally not related to that Uncanny Valley Girl. She's, like, 'soooooo weird. For sure!

Retrieved from "https://allthetropes.org/w/index.php?title=Valley_Girl&oldid=1946085"
Categories:
Cookies help us deliver our services. By using our services, you agree to our use of cookies.