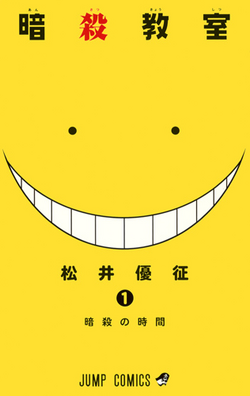 After destroying the moon, an inhuman nigh unkillable creature has decided to destroy the earth in less than a year. For some reason, he has decided to become a High School teacher and under no circumstances will harm his students. His students now have to kill their teacher before he destroys the planet. This may be more difficult than expected, however, as not only Koro-sensei (the name they decided to call the creature) night unkillable, he also is the best teacher they have ever had.

Assassination Classroom is a manga series written and illustrated by Yūsei Matsui. It originally ran in Shonen Jump from July 2012 to March 2016, compiled in 21 volumes, and is licensed in North America by Viz Media. It has had two anime adaptations, a single OVA episode in 2013, followed by a TV series in 2015. It also has two live-action adaptations, released in 2015 and 2016.

Tropes used in Assassination Classroom include:
Retrieved from "https://allthetropes.org/w/index.php?title=Assassination_Classroom&oldid=1799603"
Categories: