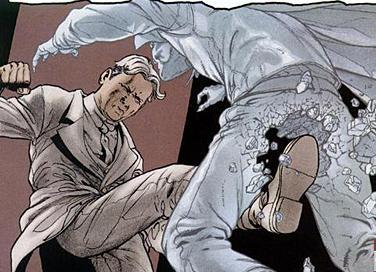 Men's General Etiquette: To strike another man's groin is to be lower than a snake.

Whether the object doing the striking is an errant piece of sports equipment or a deliberately placed foot, the end result is going to be grown man doubled over and trembling with pain. Bonus points if he then hobbles away and says something in a high-pitched voice. Not only will everyone find this hilarious, but tape it and play it back for the guy and even he will probably laugh. At least, once the swelling goes down.

A subversion of this is Balls of Steel, where a character - for whatever reason - does not take damage from a Groin Attack.

Of course, this usually only applies to men, as women seem to be immune to the trope. Any female martial artist (or anyone with a working knowledge of what nerve endings are) can tell you that a properly applied Groin Attack on a woman is definitely not painless, but the humor doesn't come from the pain, just from the specific reaction. In comedy the female recipient of such a blow is likely to shrug it off as though nothing even happened. There are exceptions, though.

Also see Standard Female Grab Area (which is not the same area), Eye Scream, Fingore, and The Tooth Hurts are other Primal Fear reactions. The Distaff Counterpart to this trope is Breast Attack. Often utilized by a Combat Pragmatist.

WARNING, Reading these may cause extreme paranoia about injury to the pubic area and wincing in sympathy pains. Yes, even if you're female. This is never as funny in Real Life as it is in fiction, and can cause a very nasty injury, so Don't Try This At Home

Examples of Groin Attack are listed on these subpages:
Retrieved from "https://allthetropes.org/w/index.php?title=Groin_Attack&oldid=1961608"
Categories:
Cookies help us deliver our services. By using our services, you agree to our use of cookies.