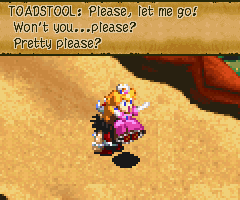 Just another Wednesday for Princess Peach.

A character, usually female and nubile, is portrayed as helpless and in danger in order to put the cast in motion. In particular, the cast is unified, putting aside differences in pursuit of the rescue.

This works if the damsel in distress is a beloved character, but can be very annoying if the audience wouldn't mind her dead, or sees the helplessness as Character Derailment. An Action Girl who becomes a damsel in distress is likely a Faux Action Girl, though not always; if they can reclaim their Action Girl credentials after being freed, they were just experiencing Badass in Distress after being thrown a Distress Ball.

Don't expect people to cut her some slack, even if she logically would not have the power or abilities necessary to help. In more recent works the damsel is more likely to rebel one way or another, which can either help or make things worse. The screaming associated with this trope has largely been replaced with getting angry and telling her captors to put her down, but she will still scream when they throw her off a building.

Sometimes the character gets kidnapped for the sake of her good looks or royal blood, but in recent works she's more likely doing something that is a threat to the party that kidnaps her (reporters are common), which allows her to look smart and independent before she needs to be saved. Alternatively, she can end up prisoner as a Heroic Sacrifice; realizing that there is only enough room to get all the children on the transport, or attempting to free other prisoners (which may or may not succeed before her capture) are popular.

Generally expected to give The Hero a Smooch of Victory when he rescues her. Unless he doesn't.

Chained to a Rock is an ancient form; Girl in the Tower and Hypnotize the Princess are slightly more recent. A non-endangered form exists in the Living MacGuffin, who is safe but out of the hero's reach, be it with distance or conditioning love/marriage. Distressed damsels are often Bound and Gagged, especially where Author Appeal is concerned.

If the kidnapper in question is particularly nasty, expect an I Have You Now, My Pretty situation to occur. If the character does not become a Damsel Scrappy but still is constantly captured, they are a Designated Victim. A more sexist version is the Disposable Woman.

For the Gender Flip, see Dude in Distress. See also Distress Ball, Standard Female Grab Area, Determined Widow, The President's Daughter and Save the Princess. If the girl is actually faking this for her own benefits, depending on her purposes she's either a Deliberately Distressed Damsel, a Decoy Damsel, or a Play-Along Prisoner. If she's got a strong spirit despite her fighting disadvantages, she's a Badass Damsel.

Not to be confused with the 2012 comedy film Damsels in Distress.

Examples of Damsel in Distress include:

The gang takes off to attempt to save her anyway.

Retrieved from "https://allthetropes.org/w/index.php?title=Damsel_in_Distress&oldid=1838596"
Categories:
Cookies help us deliver our services. By using our services, you agree to our use of cookies.