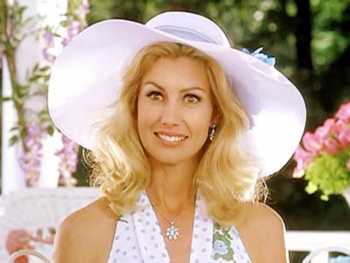 Everyone loves Purity Sue. They can't help it! She's practically perfect in every way. The Stepford Smiler is much like Purity Sue: she's bright, chipper, and an all-around pleasant person to be with.

The Stepford Smiler is obsessed with projecting an image of wholesome happiness in order to be accepted by her peers. Tragically enough, they'd probably accept her for who she is regardless of her self-imposed Masquerade. Her flawlessly crafted facade hides a real person that's usually breaking like so much fine china in order to keep up the deception.

These are the three main types of Stepford Smiler:

Depressed Type: The character seems to be happy, cheerful, is always smiling and seems to live a perfect life, but inside she feels very sad and depressed.

Empty Type: The character seems to be kind and cheerful, but her True Self is motiveless and hollow.

Depressed Type Heroines or show co-stars that are Stepford Smilers can either be played straight (they really are that shallow) or to gain viewer sympathy as they struggle to live up to their own impossible ideals. Villainesses like the Evil Matriarch who are Stepford Smilers are usually played one of two ways: it can either humanize them, much like the heroine, or it can accentuate their evil by contrasting it with their soullessness. Feminine pronouns are used throughout this trope because the Stepford Smiler is a traditionally female role, though there are many male examples too. Sometimes, they're even a couple.

The Empty Type 's mask itself can also hide a terrible secret... there is nothing behind it. The void is either a result of using up so much energy pretending to be normal that nothing is left over, or because there was nothing there to begin with. The trope-naming Stepford Wives fall into this second category, naturally.

Scared yet? It gets worse.

There is a very good chance a character of the two first types is dosed up on prescription tranquilizers or antidepressants. With or without drugs, if a Stepford Smiler smiles long enough without cracking, she can become the mask and turn into an Insane Type. Some Stepford Smilers buy into the dead Barbie smiles to such a degree that they care for nothing other than maintaining appearances, having money, making sure their hair is just right, and improving their social standing, all of which are pursued with equally Social Darwinistic means. Essentially, they become the materialist equivalent of the Nietzsche Wannabe. Insane Type characters sometimes have another kind of smile behind the fake one.

Not every Housewife is a Stepford Smiler, obviously. They often encounter one as a nemesis instead, in a post-High School example of the Alpha Bitch. Still, some readers describe any Housewife raising her own children as a Stepford Smiler on little if any evidence, bringing in the Unfortunate Implications about "staying at home = women being slaves of those evil men."

The Stepford Smiler gets her name (as does the Stepford Suburbia in which she lives) from the book and later movies The Stepford Wives, about a village whose men conspire to create the Barbie perfect wife, all with similar eerie smiles.

See also Attention Whore (a common mask for these types), Sad Clown, Faux Affably Evil, Beneath the Mask, Bitch in Sheep's Clothing, Broken Ace, Comedic Sociopathy, The Fake Cutie, Evil Matriarch, Extreme Doormat, I Just Want to Be Normal, Mary Sue, Masquerade, Think Happy Thoughts, Uncanny Valley Girl, Yandere, and the darker variants of Minnesota Nice. Contrast with Nietzsche Wannabe, The Stoic, The Pollyanna, Yamato Nadeshiko. Compare/Contrast with The Snark Knight, whose demeanor is typically the inverse of the Stepford Smiler, and the Stepford Snarker, whose motives are the same, but whose mask is made of snark rather than smiles. The Crap Saccharine World is basically this trope upscaled to a much bigger setting.

Examples of Stepford Smiler include:

Retrieved from "https://allthetropes.org/w/index.php?title=Stepford_Smiler&oldid=1871604"
Categories:
Hidden category:
Cookies help us deliver our services. By using our services, you agree to our use of cookies.