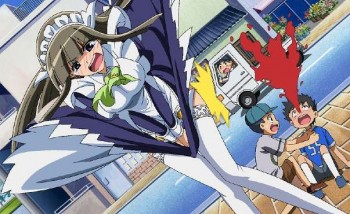 Marilyn Monroe, eat your heart out!

In Japanese media, healthy young men that have no other sexual outlet will often suffer nosebleeds upon seeing the naked female body, or even just a pair of well-filled panties. It's probably a side effect of High-Pressure Blood in a body that's Overdrawn At the Blood Bank.

The nosebleed is, of course, a visual shorthand/euphemism for sexual arousal. It is commonly interpreted that way for males and females, with little trickles of blood indicating mild arousal, and gushing fountains of blood indicating erection/extreme arousal in both sexes. It can also be interpreted as shorthand strictly for erections in males. In that case, when blood shoots from the nose explosively, and in ridiculous quantity, the implication would be an ejaculation. In certain circles, an erection has been referred to in recent years as a "Japanese nosebleed".

This happens in virtually every anime with Fan Service.

The concept comes from a Japanese old wives' tale, and might be Truth in Television in very rare circumstances.

In recent anime and manga, female characters are increasingly becoming subject to nosebleeds. This typically happens to characters with strong... appetites and Schoolgirl Lesbians in particular. Yaoi Fangirls are also likely to show this effect; and last but not least, in smutty Josei or Shojo manga, a nosebleed might happen to a Defrosting Ice Queen female lead, as a sign that she's starting to thaw for the sexy male lead. The more benign, traditionally feminine version of this is Luminescent Blush.

Female characters may also get nosebleeds upon seeing something they think is absolutely adorable, although males have lately become increasingly vulnerable to that as well.

Examples of Nosebleed include:

Retrieved from "https://allthetropes.org/w/index.php?title=Nosebleed&oldid=1899711"
Categories:
Cookies help us deliver our services. By using our services, you agree to our use of cookies.