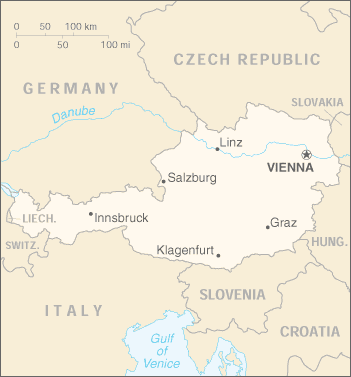 There are no kangaroos in Austria.

Austria (Österreich) is a small, central European republic ("The Danube Republic") shaped vaguely like a pancreas chicken drumstick Schnitzel that was once one of the leading Empires of Europe.

History The Habsburgs arose in Austria proper, the North of the modern republic and became Archdukes, Emperors of the Holy Roman Empire (of German Nation), and, through marriage backed by the occasional war, spread over central Europe, becoming Kings of Bohemia (Czech Republic) and Arch-Dukes of Austria within the Empire and Kings of Hungary (including Croatia, Slovakia, and Transylvania) without it. In 1806, Napoleon decided that this was just too confusing and abolished the HREGN. From then on, the Habsburgs were to be Emperors of a single united Austrian Empire, within which were Austria, Bohemia, Hungary, and The Rest.

In 1848, the Hungarians revolted, but a part of the Slavs and Romanians (along with Magyar loyalists), who were broadly on favour of Habsburgs when it was a choice between them, Russians, and Turks, counter-revolted and helped the Austrian troops regain control. However, it was the Russian intervention that sealed the fate of the Hungarian War of Independence.

In 1866, the notorious Bismarck tricked them into declaring war on Prussia and their arses were promptly handed to them. In the chaos that ensued, the Hungarians managed to gain autonomy for their half and the Empire became Austro-Hungarian.

In 1914, all hell broke loose over a little place called Bosnia, then a part of the Empire. At the same time, the Austrian half of the Empire had become more and more decentralised, while the Hungarians were determined to remain top dogs over the Slovaks, Transylvanians and Croats. This led to the Empire breaking down and being divided between Romania, Yugoslavia and the new independent nations of Czechoslovakia, Hungary and Austria.

The Austrians had always thought of themselves as Germans. Special Germans, but Germans, so they promptly voted to join Germany. The Entente vetoed this, but even as pro-independence sentiment grew and a pro-independance pseudo-fascist movement took power, Hitler decideed to veto the veto. Whether Austria was a Nazi conquest or willing Reichsgau is a sore issue, especially given Adolf Hitler was technically an Austrian (although admittedly he never liked Austria that much, especially not the multicultural empire). There is still a certain amount of denial going on about it.

After the war, the country was divided like Germany into zones, but the British, US, French and Soviet armies all agreed in 1955 to leave if the newly-reconstituted Austrian Republic swore to remain neutral. Following the end of the Cold War, Austria joined the European Union in 1995.

Austria today Austria is most famous for its mountains, the western part of the country being Alpine. The capital, Vienna, however, lies on a wide plain that takes up most of the northeast of the country - this only increases the sense that Vienna is somehow "foreign" and "alien" to the rest of the country. (And definitely too big for such a small country, not the empire that it once was capital of.)

Austrians are often regarded as "Laid-back Germans", sharing their larger neighbours' love of neatness and orderliness, but with a more relaxed, friendly air (and a certain amount of bureaucratic inefficiency). They also do not, ever, like to be called German these days anymore. There is no nobility in Austria any more, all titles have been abolished. If someone is a "von" they are most likely German (In Germany nobility was abolished 1918, but they were allowed to keep their names).

Yet, Austrians are generally more right-wing than Germans, both socially, culturally and politically. Conservative and moderate right parties have the majority of voters on their side, and the country itself can, unlike their neighbour, still afford to be a bit more introverted and nationalistic. But of course, Austria has plenty of Self Deprecating Humor left to constantly lampshade their own ideologies.

A large portion of income in many parts of the country is tourism. Having both a rich history and beautiful nature (and skiing slopes) to show off, this is both understandable and a bit annoying for those Austrians who do not want to be associated with Dirndls and Lederhosen and Yodeling (for that, see Switzerland or Bavaria), yet are backstabbed by their own tourism board. Curiously enough, many younger Austrians in rural areas go back to wearing lederhosen when going out drinking. The reason? They are durable and it is completely accepted if you smear your dirty hands all over them. It is even said that a lederhosen is only a real lederhosen when it is dirty and grimy enough to stand up for its own...

Yet, one should not forget the feud that is going on between southern Germany (Especially Bavaria) and eastern Austria. Well yes, it is usually a rather mild-mannered feud (shining through mainly in sports and other competitions)... but its origins can be traced as far back as the Thirty Years' War. It's a Long Story. The long and short of it is that neither side likes it to be compared to its counterpart.

The biggest newspaper is the "Kronen Zeitung", which is rather right-wing (but it depends on the whims of their owner; recently, said owner Hans Dichand who had run it for half a century died) and pretty influential. How influential? It sells one million copies in a country with eight million people. - That means it reaches almost three million people each day.

Sport Austrians have two main sports: Football (Soccer for Americans), in which they are less than stellar (losing against such Juggernauts as Faroe Islands) and Skiing. Skiing is extremely popular and Austrians are usually among the best skiers in the world. This leads to giant expectations by the public, going as far as calling everything but a top-three-position a failure.

Other sports practiced and supported in Austria are:

Military As Austria is under obligation to remain neutral, there is not a big need for a standing military. Still, all male adult Austrians are required to absolve 6 months of military training ("Präsenzdienst") or 9 months of civil service (ambulances, nursing) if they refuse. The main rifle of the military is the Steyr AUG (STG 77), the service pistol the Glock 17, both being Austrian products. After working with wildly outdated SAAB Draken for decades, Austria has now bought Eurofighter jet airplanes. Despite frequent jokes to the contrary, they actually are able to start, turn around and land again without violating foreign airspace.

Austria in fiction and media actually mostly unknown in Austria. Whenever Austria turns up in a movie, it is also prone to having Television Geography as both the directors and the tourism board have an interest in showing off the beautiful and well-known tourist places. This can greatly annoy people who know the geography in some cases. If it's not the Austrian Alps (as seen in The Sound of Music), it's usually the stage for Cold War intrigue or classical music concerts.

Few Austrian productions make it abroad, those that do are usually the ones dealing with more serious themes like historical movies. There are many lighter-hearted productions, often recorded in the regional dialect, which range from ironic and socio-critical to silly-humorous. Recently, several Austrian movies have found critical acclaim, earning a Best Foreign Movie Oscar and other titles. As usual in Austria, the films are likely to become famous after that fact. Indeed, people are more likely to know its aristocratic personification than those movies. 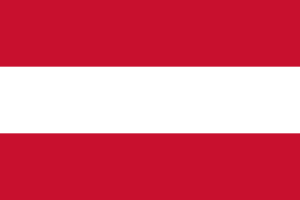 Retrieved from "https://allthetropes.org/w/index.php?title=Austria&oldid=1516485"
Categories:
Cookies help us deliver our services. By using our services, you agree to our use of cookies.