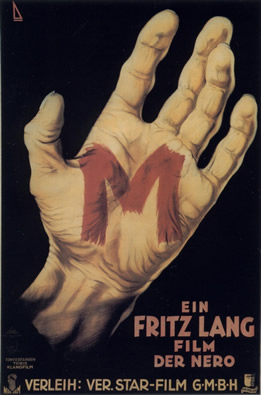 Fritz Lang's 1931 masterpiece about a serial child killer and the people who try to find him: the police, the criminal underworld, and the city's beggars. One of the first examples of Film Noir, M provides not only stark black and white images, but also a haunting Leitmotif throughout the film.

Hans Beckert (Peter Lorre) whistles "In the Hall of the Mountain King", as he buys a balloon from a blind balloon seller for a little girl named Elsie Beckmann. A scene later, Elsie's mother looks for her and can't find her, shouting her name as the camera shows the balloon drifting in the sky.

Police inspector Karl Lohmann, meanwhile, is investigating the serial killings with modern policework, such as fingerprinting and handwriting analysis. The criminal underworld, too, is searching for the killer, since more police on the street is bad business for them and they, too, are disgusted by the killer targeting children.

When Hans whistles "In the Hall of the Mountain King" again in front of the blind balloon seller, the seller tells one of the criminals, who marks Hans with a chalk M on his jacket, so they can follow him. The criminal fraternity goes to more ruthless lengths than the police to catch the killer, and cause a great deal of collateral damage to people and private property, before finally closing in on him. The criminals kidnap Beckert and bring him to a Kangaroo Court, where Hans makes an impassioned speech about how he should not be blamed for the murders since he can't help himself, he can't help that he's insane. Despite the nature of the court, the criminal appointed as Beckert's legal representative tries hard to defend him fairly. The 'prosecutor' takes the stance that either for his crimes (if he is not insane) or for his insanity, Beckert has forfeited his right to live and must be exterminated. Beckert desperately tries to he explain that he can't help being this way. The criminals are about to kill Hans when the police bust in and arrest both him and his captors.

As Hans is about to be sentenced by five judges, the mothers outside the courtroom say it won't bring back their children. Elsie's mother says they should have kept better watch. "We have to keep closer watch over the children. All of us."

One can watch or download M from the Internet Archive.

Tropes used in M include:
Retrieved from "https://allthetropes.org/w/index.php?title=M&oldid=1814633"
Categories:
Cookies help us deliver our services. By using our services, you agree to our use of cookies.