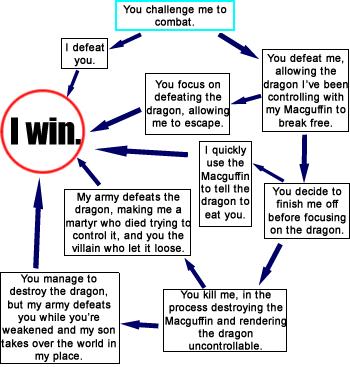 "The key to strategy... is not to choose a path to victory, but to choose so that all paths lead to a victory."
—Cavilo, The Vor Game

A Xanatos Gambit is a Plan whose multiple foreseen outcomes all benefit its creator. It's a win-win situation for whoever plots it.

At its most basic, the Xanatos Gambit assumes two possible outcomes for the one manipulated—success or failure. The plan is designed in such a way that either outcome will ultimately further the plotter's goals.

Since the Xanatos Gambit can involve an obvious goal's apparent failure, this is a convenient device on an ongoing series to let the villain occasionally win (preventing Villain Decay) while still giving the heroes a climactic pseudo-victory. The only way to escape a Xanatos Gambit once you're caught up in one is by somehow foiling both presented options and leaving the organizer thoroughly beaten.

This trope is named after David Xanatos, one of the main antagonists in the series Gargoyles, who was a master of the technique and used it consistently to serve his own ends.

If the character's plan is continually revised to bring about a winning solution no matter what happens, he is playing Xanatos Speed Chess. When a plan is so ludicrously complicated that it relied more on luck than actual planning and foresight, it's a Gambit Roulette. If the plan relies on misdirection rather than Morton's Fork, then it's a Kansas City Shuffle. If several people are trying to out-scheme the other in this way, you might be headed for a Gambit Pileup.

Contrast with Indy Ploy, a "plan" executed with no planning whatsoever, and Batman Gambit, a plan which relies on people doing as predicted in given circumstances. The Magnificent Bastard is a villain type likely to use these, but a particularly skilled Chessmaster, Manipulative Bastard, or Guile Hero may also pull one off.

Remember: It's only a Xanatos Gambit if all the plausible outcomes benefit the mastermind in some way. At the very least, the planner has to benefit regardless of whether the obvious plan succeeds or fails. This is not a shorthand for "any clever, complex, evil plan." You may want Evil Plan for that. Instances of this term that use "Xanatos Gambit" without the key quality of "all (or at least two) plausible outcomes always benefit the mastermind" are WRONG. Please fix them wherever you see them at All The Tropes. If you can't decide what kind of plan it is, use The Plan which is the supertrope for plans in general.

Examples of Xanatos Gambit include:

"If she chooses Dudley, then we are safe from foreign Catholic princes, though I admit it will be a hard price for me to pay. If she takes Darnley, we have given nothing and she has a weak, degenerate fool as her consort. Win or lose the wager, I cannot lose the game."

"He [Vimes] wondered what it was like in the Patrician's mind. All cold and shiny, he thought, all blued steel and icicles and little wheels clicking along like a huge clock. The kind of mind that would carefully consider its own downfall and turn it to advantage."

Caesar: "Cross my heart and hope to die"

Harvey: If I win, I look good. If Louis wins, he looks good. Either way, you look good.

Valcheck: "This is a win-win for you, ain't it? He won't play, you beat the shit out of him because crime is up. Press loves it, and you score. Flipside is that if he caves, you get yourself a snitch in the Mayor's inner circle."

Hylden Lord: You pathetic creature - you haven't got a clue. The seduction of the Circle and possession of Mortanius; Ariel's murder; the corruption and collapse of the Pillars: all orchestrated as a prelude to this moment. We sought an incorruptible vessel, and you provided one. We required the blood of our ancient enemy, and you delivered Janos Audron - having first been lured to the Heart of Darkness. Best of all, you murdered the Scion of Balance to get it. We've already won.

Wheatley: Four-part plan is this. One, no portal surfaces. Two, start the neurotoxin immediately. Three, bomb-proof shields for me, leading directly into number four: bombs. For throwing at you.
PART FIVE! Booby Trap THE STALEMATE BUTTON!

The Sorrow: And you are as wily as ever. You manipulated the situation so that no matter what happened, you got what you wanted.

Tarquin: Their every move makes my victory more complete.

Goliath: Only you would regard love as a weakness.

"There is no Trill. There never was."

Plasmius: Using your opponent's weaknesses against him... I am teaching you something after all.


Plasmius: Sneak attack -- very good, Daniel. You're getting more like me with every battle.

Danny (about to pass out): I - I don't… understand…
Vlad: What? That I used two fourteen-year-old pawns to turn a knight and topple a king? It's chess, Daniel, of course you don't understand! But then… you never really did.

If I win, then B must pay me for teaching him.
If I lose, then B has won, and must still pay me.

If I win, then I do not need to pay A, for I have won.
If I lose, then I have not won my first case, and need not pay him.

"Unfotunately", he overestimated the public's taste for idiotic racist tracts. As with other examples, it's too long for anyone to consider sitting down to read. Also, there is quite a bit of disappointment it wasn't 777,777 words long when it was so close to being so. (Numerology is very big amongst either far-fringe movement.)