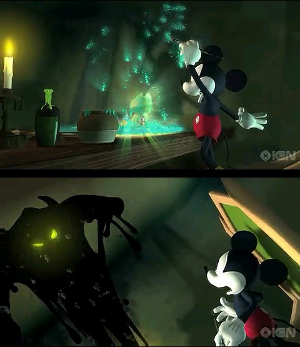 Congratulations, you just created an Eldritch Abomination. Now just wait until you try to fix your mistake.

The hero has accomplished their goal; they've killed the Big Bad, or defeated them forever, or at least scored a major blow against the antagonist. They've done what they set out to do...

...but not so fast! It turns out that by the very act of success, they've unwittingly made things worse. Maybe the now-dead antagonist was actually holding back an even greater evil. Maybe the villain, having been defeated or damaged, is now transformed into a new, ultimate, unstoppable, invincible, angry form, generally against the villain's will (or against their expectations, anyway). Maybe the villain, despite their villainy, was serving some other greater good—keeping the world/universe/nature/whatever politically or literally balanced—and their demise throws things into chaos. Maybe that princess you saved is a cold-hearted tyrant at the head of an oppressive regime. Perhaps taking down the villain has resulted in an Evil Power Vacuum, and now even worse guys are fighting to fill the void that the previous villain left, without a single regard for who else gets hurt. Or perhaps the only means of foiling the villain involves questionably massive "collateral damage". For whatever reason, the hero's victory over death and destruction directly or indirectly leads to an even greater wave of death and destruction, or at least an even greater threat of such. Oh dear.

Maybe the villain themselves will warn the hero about the possible consequences, as a last-ditch attempt to save their own skin, or as a bitter "parting shot" to ruin the hero's victory ("You fools... do you even know what you've done?"). Villains being villains, this may just be a bluff. Or maybe the villain will just lament over how the hero defeated them despite all their efforts - it wasn't some sort of Plan of theirs for the hero to "win" and thus make things worse (if it was, that'd be My Death Is Just the Beginning). Then again, Poor Communication Kills often comes into play as the villain will usually be uselessly vague and give no concrete reason for why foiling him would be bad. On the other other hand, a clear warning might be taken as Cassandra Truth anyway. You can't win.

If the mission was a rescue, it was an Unwanted Rescue, and the former captive may bitterly inform them of the true facts.

In most cases, of course, the hero's new mission is to stop the new danger they've unleashed, preferably in a way that doesn't spawn ever greater menaces. "Darker" plotlines may end the story right there, instead, and it's always possible the villain's demise inadvertently resulted in the irreversible destruction or horrifying mutation of the world. I hate it when that happens. If used excessively, this trope often leaves an audience with a sense that the hero shouldn't have tried to change things for the better and indeed shouldn't have even left home, which can be a Family-Unfriendly Aesop, but also a more literal moral about getting seriously involved in things without learning much about them.

This trope can be annoying in video games as often-times Stupidity Is the Only Option, particularly in the case of a MacGuffin Delivery Service... It is not particularly fair to try to make the player feel guilty about a course of action they had no control over, and indeed, might've gotten a "Game Over" if they attempted to not fulfill the objectives in question.

The term "Pyrrhic Victory" has the same connotation and originated from the Pyrrhic War fought by King Pyrrhus in 279 BC, which makes "Nice Job Breaking It, Hero" Older Than Feudalism. The tropes overlap, but Pyrrhic Victory is when someone succeeds at their goal but with a very high price, while Nice Job Breaking It, Hero includes actions that might not be necessary or even intentional. In addition, this trope sometimes results in no victory at all, not even a Pyrrhic one.

Sometimes a badly thought-out plot for the sake of action can have exactly the same effect when Fridge Logic catches its tail. That's one of the reasons why a good Game Master habit is writing the plot starting from the "what happens if Player Characters aren't here at all or do nothing" point.

Usually a Tragic Mistake. Compare Create Your Own Villain, What the Hell, Hero?, Unwitting Pawn, Must Make Amends, You Already Changed the Past, Two Rights Make a Wrong and Nice Job Fixing It, Villain (but note that villains are also subject to this trope—they can do something careless that screws them over or helps out a worse villain). Compare We Want Our Jerk Back when the hero/villain makes the villain/hero powerless, only to have it backfire and give them a worse villain/hero/fate than expected, resulting in them wanting things to go back the way they were. This trope may lead to a Redemption Quest in an attempt to make up for the mistake.

Hitler's Time Travel Exemption Act, in certain cases, is a Sub-Trope of this. See also Had to Come to Prison to Be a Crook, which is this as applied to a legal system. (Or at least a well-intended one.) May overlap with Self-Fulfilling Prophecy. No Endor Holocaust is what happens when this is ineptly averted. And if the hero dies following the reveal and is unable to stop the new menace, you've just read a Shoot the Shaggy Dog story. Despite obvious parallels, most "load-bearing bosses" in video games do not fall under this category. When this happens with fandoms, it's Why Fandom Can't Have Nice Things.

Examples of Nice Job Breaking It, Hero are listed on these subpages:
Retrieved from "https://allthetropes.org/w/index.php?title=Nice_Job_Breaking_It,_Hero&oldid=1932926"
Categories:
Cookies help us deliver our services. By using our services, you agree to our use of cookies.