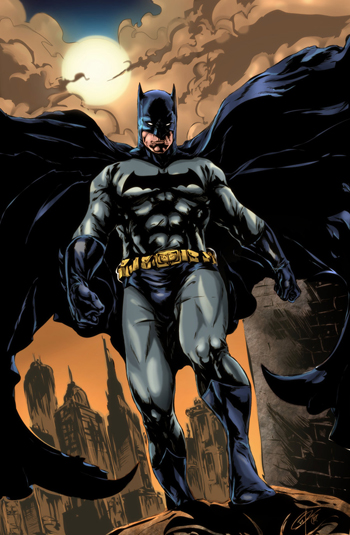 "Criminals are a superstitious, cowardly lot..."

Batman is also one of the greatest Trope Maker and Trope Codifiers in not just comics, but all visual media; one of the oldest superheroes still in print -- having debuted in Detective Comics #27 (May 1939) -- Batman is one of the three best known Superheroes ever (alongside Superman and Spider-Man). The Batman mythos has expanded into numerous forms of media in the decades since the character's debut, and there's a damned good argument to be made for Batman being the most critically and culturally successful superhero in history. When veterans such as Superman have taken beatings in the zeitgeist for perceived problems, Batman's legacy and relevancy have never truly faded in the public eye, and his popularity across multiple sections of the mainstream remains as strong -- if not stronger -- than it was back in the 1940s. He's pretty much the only superhero to date who could pull out a lightsaber with no explanation at all and get away with it.

At the age of eight, Bruce Wayne witnessed the murder of his parents at the hands of a mugger. Swearing vengeance against all criminals, Bruce used his parents' vast fortune to travel the world and hone his fighting abilities and detective skills. When he felt he was ready, Bruce returned to his beloved Gotham City, intent on removing the criminal element that had overrun the city in his absence. Donning a costume with a bat motif to strike fear into criminals, Bruce protects the streets of Gotham as "The Batman" at night while pretending to be a clueless playboy billionaire by day.

Over time, Batman's swung between a bright, shiny Cape and a dark, nightmarish Shadow Archetype and the iconic Cowl; in modern times, it's usually the latter. A number of comic-book writers, most famously Frank Miller, love the contrast between Batman and Superman -- darkness and light -- and often play it up when the two are paired together.

This series has a (very long) Character Sheet.

Various parts of the franchise have provided the name for:
Tropes common among all versions:

]
Retrieved from "https://allthetropes.org/w/index.php?title=Batman&oldid=1922879"
Categories:
Cookies help us deliver our services. By using our services, you agree to our use of cookies.