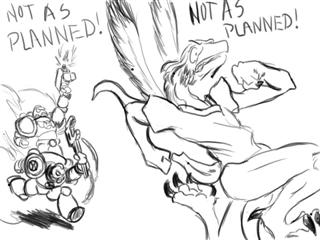 Call it a hunch, but I'd say things didn't go as planned here.

Ah, nothing denotes how Crazy Prepared The Chessmaster is like the good old Gambit Pileup. Truly, there is nothing these twelfth-level omni-geniuses have not contemplated in their equations and planned for with contingencies B through Z^42.

Problems tend to come in five varieties, of which varieties 3, 4, and 5 qualify for this trope:

1. Known Knowns: There are the known dangers, these you deal with directly: My opponent has access to laser blasters—I need Deflector Shields before I attack.
2. Known Unknowns: These are the things strategists know they don't know, but they can prepare for the different possible outcomes: The enemy has his forces deployed elsewhere when you are Storming the Castle, so you need a plan for what to do if these forces do not return in time (to take full advantage), and you need a plan for what to do if the enemy forces return early.
3. Unknown Unknowns: Then there are the unknown unknowns, or even unknowable unknowns. These cannot be prepared for, planned for, or in any way anticipated. They are the bane of all well laid plans. This can often be a Genre Shift, for example, and the character was in the dark because of The Masquerade. The mage being surprised by the space alien, for instance, or The Mafia not expecting Psychic Powers. Acts of God and Outside Context Villains tend to fit in here, unless characters are aware that they are a Cosmic Plaything, and even then it's hard to know what you don't know, except that you don't know anything.
4. Unknown Knowns: It happens. Sometimes the plotter knows a given person, event, or variable is present... but doesn't see how it could possibly impact their foolproof plans and proceeds to dismiss it or mistreat those "irrelevant" to his plot, and otherwise ignore the sword overhead while whittling at the rope holding it there.
5. False Assumptions: Even the most diabolical scheme can be doomed before it even starts if it's built on faulty information. That ridiculously circuitous plan to steal the MacGuffin from the safe deposit box by sneaking into the bank disguised as security guards? The only thing The Hero's grandfather hid there was some old family memorabilia; the MacGuffin is hidden somewhere else entirely (if it even exists).

Any plotter claiming to have all five of these variables accounted for (and actually has a plot succeed) is very likely playing a Gambit Roulette and getting help from on high to do it.

A plotter who is aware that these can appear, builds the flexibility into his plan, and improvises when they arise, is playing Xanatos Speed Chess.

Compare Spanner in the Works, which very often is the unknown factor. See also Didn't Think This Through.

Examples of Didn't See That Coming include:

Retrieved from "https://allthetropes.org/w/index.php?title=Didn%27t_See_That_Coming&oldid=1870962"
Categories:
Cookies help us deliver our services. By using our services, you agree to our use of cookies.