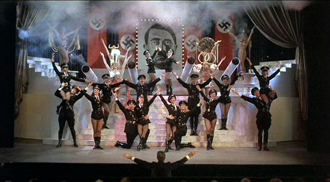 Springtime for Hitler and Germany.
Winter for Poland and France.

A character's attempt to deliberately fail at some task (usually to fuel some other, hidden goal) backfires when the intended failure proves impossible; in other words, they failed to actually, well, fail. (Something like that.)

This is usually caused by Finagle's Law at work, where the attempt to fail is so spectacular that is Crosses the Line Twice, going from So Bad, It's Horrible to So Bad It's Good (or perhaps even Crazy Enough to Work).

In a variation, the person will fail at the initial task as planned, but somehow manage not to accomplish the hidden goal that the failure was supposed to yield. The person is now doubly cursed, as they now have to deal with the fallout from their planned failure without being able to enjoy the rewards of the goal they were actually striving for.

Essentially Fake Real Turn, with "fake" and "real" replaced with "failure" and "success" respectively. Common for people with Dismotivation. May be caused by a Plague of Good Fortune. If the initial failure would be getting in trouble with the authorities, see Can't Get in Trouble For Nuthin'. If the planner is perfectly content with the success of the first part of the scheme, it's a Xanatos Gambit.

Not to be confused with Gone Horribly Right, where a person aims to succeed rather than fail, and the success turns out to be a bad thing instead of a good thing. See also Reverse Psychology. When the sheer magnitude of fail is impressive in itself, that's Epic Fail.

Examples of Springtime for Hitler include:

Retrieved from "https://allthetropes.org/w/index.php?title=Springtime_for_Hitler&oldid=1957492"
Categories:
Cookies help us deliver our services. By using our services, you agree to our use of cookies.