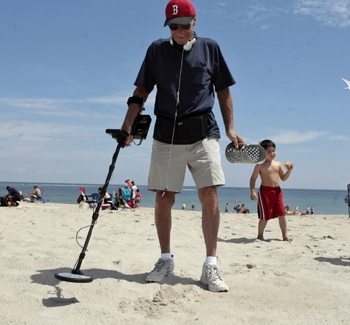 In fiction, it's common to see people on beaches looking around for stuff.

It happens in Real Life, too.

In Great Britain, they usually use metal detectors. This often carries the stereotype (in Britain at least) of someone who searches the countryside hoping to find buried treasure (not as silly as it sounds, since hauls of artifacts made of precious metals are occasionally found in Britain, which is what leads to this kind of behaviour in the first place). It's technically legal (and landowners have a good incentive, since they're entitled to a share of whatever's found on their land) and there are even specific laws for finding buried treasure (technically it belongs to the crown, but the finder and landowner will be paid a fee from whatever museum that ends up taking it), however for obvious reasons it greatly annoys actual historians and archaeologists, who'd rather see the sites properly excavated rather than plundered. This trope is not limited to beaches. See also Metal Detector Puzzle when this occurs in Video Games. Occasionally seen in Beach Episodes.

In Canada, the stuff that people look for is much more obvious and not buried in the sand. The long running TV series, Beachcombers had the starring character, Nick, making a living salvaging lumber, using his boat to haul lost logs into the water for towing to timber companies looking to recover their lost materials.

Examples of Beachcombing include:

Retrieved from "https://allthetropes.org/w/index.php?title=Beachcombing&oldid=1855618"
Categories:
Cookies help us deliver our services. By using our services, you agree to our use of cookies.