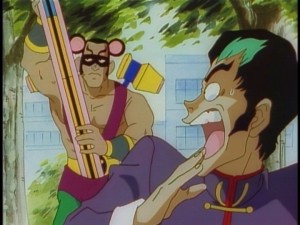 Don't touch that. We know exactly where it's been.

Basically a Hammerspace spot where the sun don't shine. Can be Nightmare Fuel for some, usually for the characters watching more than the audience.

Women can pull this trick too, with their own... implications about it. Also can be done whether it's pants or a skirt.

When the Trouser Space region is explicitly the character's rectum, then that's an Ass Shove. When the item retrieved is a gun, then it's a Pants-Positive Safety.

Not to be confused with Magic Pants, or, despite being the trouser version of Hammerspace, Hammerpants.

Compare Victoria's Secret Compartment, You Do NOT Want to Know and Treasure Chest Cavity.

Examples of Trouser Space include:

Retrieved from "https://allthetropes.org/w/index.php?title=Trouser_Space&oldid=1844494"
Categories:
Cookies help us deliver our services. By using our services, you agree to our use of cookies.