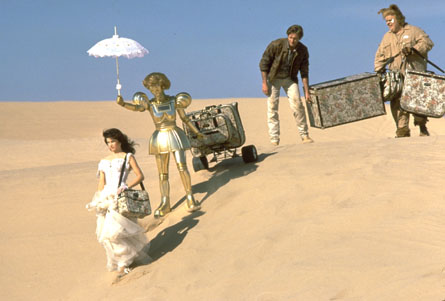 Her Royal Highness' Matched Luggage. Never go on a desert trek without it.

Spaceballs is a farcical comedy film directed by Mel Brooks which does for Science Fiction -- especially Star Wars -- what Blazing Saddles did for The Western.

Princess Vespa (Daphne Zuniga) -- the bold, bossy and beautiful heir to the throne of planet Druidia -- runs out on her wedding before she is officially married to the painfully dull Prince Valium (Jim J. Bullock), the only eligible bachelor prince in her region of space. Once she's in space, however, Vespa and her robot servant Dot Matrix (Joan Rivers) soon become the target of the Spaceballs, a group of evildoers -- led by Dark Helmet (Rick Moranis) and President Skroob (Mel Brooks) -- who plan to ransom her off for access to Druidia's atmosphere (in order drain it away and use it to replenish their homeworld's own thinning atmosphere).

Vespa's only hope lies with two mercenaries-for-hire: Lone Starr (Bill Pullman) and Barf the Mawg (John Candy), who hope to use the substantial reward offered by Vespa's father for her safe return to pay off debts owed to crime boss Pizza the Hutt (Dom DeLuise). With a little help from wise-cracking mystic Master Yogurt (also Mel Brooks), Lone Starr fights to save Planet Druidia, defeat the Spaceballs, and (maybe) get the girl, too.

In reality, the plot's a big excuse which gives Mel Brooks a large enough canvas to poke fun at tons of sci-fi tropes.

An Animated Adaptation based on this film -- Spaceballs: The Animated Series -- was developed a couple of decades later; it languished in Development Hell for so long, only thirteen episodes were made. G4 eventually gained the rights, but due to said Development Hell, it ended up promoting the show before it was ready. The series didn't air until a year later, and by that point, production had been axed before the first episode ever aired.

Complete with a Meaningful Glance between Helmet and Sandurz.

If you pay attention to this exchange you can see the Spaceball behind Dark Helmet anticipate the line and move his hands early.

Retrieved from "https://allthetropes.org/w/index.php?title=Spaceballs&oldid=1884660"
Categories:
Cookies help us deliver our services. By using our services, you agree to our use of cookies.