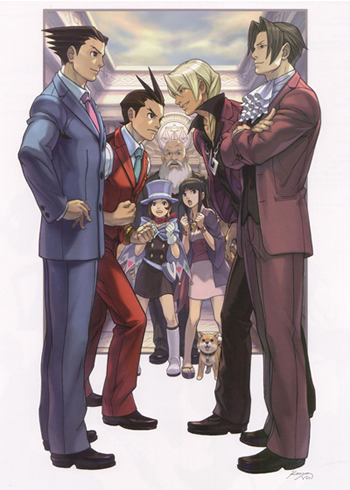 If only jury duty was this epic.

Originally released in Japan as the Gyakuten Saiban (Turnabout Trial) series, the Ace Attorney franchise chronicles the adventures of a couple of hotshot young defense attorneys. It comprises the following games:

Wii Ware ports of the first three titles have been released, as well as a version for the iPhone.

More recently, a crossover game for the 3DS with Level-5's Professor Layton series has also been announced, starring Phoenix, Maya, Layton, and Luke. Titled Professor Layton vs. Ace Attorney, it seems to entail the involved characters finding themselves in a third, swords-and-sorcery style universe, with Phoenix defending and Layton prosecuting a woman accused of witchcraft. Gameplay is a mystery at the moment. From what can be inferred, the players will take control of Professor Layton to solve puzzles in the traditional style while Phoenix Wright will then be required to engage in what are known as "Witch Trials" to defend characters. The trailer seems to imply a slightly antagonistic, if not distrusting relationship between the two and presents Professor Layton seeming to serve in the role of a prosecutor at one of these trials. The trailer can be found here.

Phoenix also made his fighting game debut in Ultimate Marvel Vs Capcom 3.

While it has become famous in the English-speaking locales for its above-and-beyond top notch localization (outside of a few grammatical errors) and has gleaned much Memetic Mutation from the fanbase, the original Japanese series has such a following that it spawned two official musicals and the Gyakuten Saiban Orchestra does regular performances. A film adaptation, directed by Takashi Miike, has also been made and stays very close to it's source material.

This Memetic Mutation lead to the creation of many things, but there are a few worth mentioning: First, its very own Gag Dub /parody series "Phoenix Wrong", mainly due to the dramatic gestures to which the characters are prone while on the stand.[1] Second, the plenty communities creating fan sequels for the series (such as this one), up to the point of making "Create your own case" engines. Third, a theme park attraction in Japan. Fourth, a fully-produced fandub of the "Rise From The Ashes" case, with every line voice-acted by actual actors. Fifth, its very unofficial [2] musical. And finally, it is now slated for a live-action film adaptation. It also has a spin-off manga, with the story by Kenji Kuroda and the art by Kazuo Maekawa.

Tropes used in Ace Attorney include:

The Musical provides examples of

The Manga provides examples of

Retrieved from "https://allthetropes.org/w/index.php?title=Ace_Attorney&oldid=1953959"
Categories:
Cookies help us deliver our services. By using our services, you agree to our use of cookies.