Breathe on the Fan 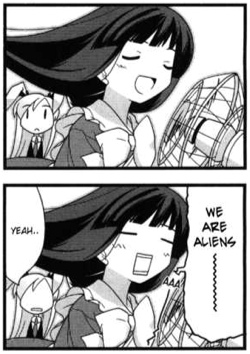 They're actually from the Moon.

Since rotary fans essentially "chop up" air as part of its function, speaking or breathing into a fan will cause a distortion effect on the voice.

Even if it's a recent production, anime and manga use the wire-cage-and-clear-blue-blade fans that haven't been sold in the US since the 1990s. They're increasingly rare in Japan, too, but since most manga authors grew up in the '90s or earlier, they're still present in their works.

Not to be confused with fans getting breathed on.

Examples of Breathe on the Fan include: