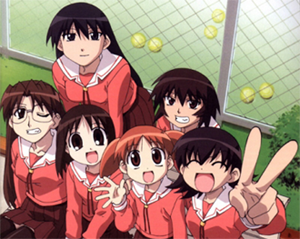 A comedy manga series and the anime based on it, Azumanga Daioh is the rather disjointed and occasionally surreal story of six high school girls and several of their teachers. Being episodic to the point of resembling sketch comedy, and largely lacking serious conflict or drama, the show has little in the way of conventional storylines, preferring to set up and deliver the animation equivalent of several comic strips per episode. This is because the show is a remarkably faithful translation of the popular monthly Yonkoma.

The title combines the author's name (Kiyohiko Azuma) with the word "manga" and the name of its original publisher (Dengeki Daioh magazine) -- it can be read as the Japanese equivalent of an acronym for "Azuma's Comic Strip For Daioh Magazine" (Dengeki Daioh being a magazine aimed mainly at younger teenage boys, the general theme of the strip was to poke gentle fun at the audience's female classmates -- "Man, teenage girls are weird...").

Azumanga Daioh has been described as "Peanuts on LSD" or Seinfeld in High School. Heavily character-driven, its humor, especially in its manga incarnation, often relies on subtle changes in facial expression, running jokes, references to Japanese culture, and jarring shifts into absurdism.

It's also notable for demonstrating that a manga and anime about high school girls can be popular and profitable by focusing on their personalities instead of their bodies, starting a trend which continued in series such as Lucky Star, Hidamari Sketch, K-On!, A Channel, and Hitohira.

This work has a Character Sheet, Headscratcher, a WMG page, and a Trivia page; in other words, the whole package.

Tropes used in Azumanga Daioh include:

Osaka: (to Sakaki and Kagura) You two are American. (to Yomi)You're Hawaiian. (to Tomo) And you're Japanese.

Yukari: (in the pool) "Oh my god! Unbelievable!"

Yukari: It's said that most Japanese have unique character of shame. Alike their character, and are proud of it very much. Generally, most of Japanese who say that in English, I think their nature of shame prevent them from improving our skill of speaking English. But we stop trying to speak English, are willing to make reading mistake. When we say...

Yukari: Oh, and don't change the seating either.