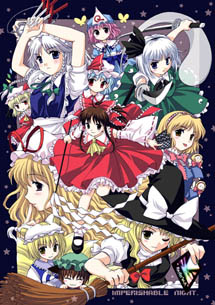 Touhou Project ("Touhou", 東方, meaning Eastern or Oriental, pronounced "Toh Hoh") is a series of Doujin scrolling shooter games in the "Bullet Hell" subgenre, developed by Team Shanghai Alice. It is most famous for its high difficulty level involving intricate bullet patterns, and the fact that instead of having spaceships and warfare vehicles, it has girls in frilly dresses: nearly every character is a Little Miss Badass, Cute Monster Girl, or Cute Witch, and wears some degree of Elegant Gothic Lolita clothing. Much of its popularity, however, comes from its enormous Doujinshi and Shipping community, unusual in that the community is creating doujinshi based on doujinshi, and is taken to another level with the equally enormous amounts of amateur musical arranges of the games' music. Indeed, most of the characters are given only a framework personality in the games, traditionally leaving most of the details up to Fanon. However, the series creator has written quite a bit of manga, stories, and general information for it as well.

Nearly all the games in the series have a plot along these lines: In the Magical Land of Gensokyo - a Fantasy Kitchen Sink in Japan, which exists halfway inside Another Dimension thanks to a powerful magical barrier - some Anti-Villain with a lot of Applied Phlebotinum on their hands thinks messing with the laws of nature to fulfill a not really evil plan would be a good idea. Miko Reimu Hakurei or magician Marisa Kirisame, due to annoyance and greed, respectively, must go out and fix the problem, occasionally with playable versions of bosses from previous games thrown in for kicks. They spend the first 2 levels wandering aimlessly and defeating random monsters/people that have no relation to the Big Bad. The third boss, however, happens to know something about the incident and points them in the right direction. The fifth boss is the Big Bad's Battle Butler, and the sixth boss is the Big Bad herself. After defeating the Big Bad, the main character will have a tea party with the Big Bad and their Battle Butler after which some other task arises, taking the form of the game's ultra-difficult extra stage.

Like Cave Story, it's also outstanding in that the entirety of the games, including the sprite graphics, 3D graphics, character portraits, dialogue, story, music composition, programming, bullet-patterns, and concept are all done by one person known only as "ZUN".

See also the extensive wiki about the game series.

The official games in chronological order: [1]

Other (see the Touhou fanfic page for more)

Tropes that pertain to the story, fanon, fandom, or other non-gameplay elements
Tropes in the games' gameplay
Retrieved from "https://allthetropes.org/w/index.php?title=Touhou&oldid=1955238"
Categories:
Cookies help us deliver our services. By using our services, you agree to our use of cookies.