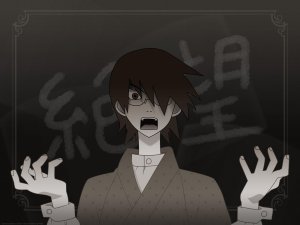 I'm in despair! The fact that someone would write a complete page on this series has left me in despair!

What do you get when you take a man who is depressed to the point of melodramatic suicide, and make him the teacher of a psychologically-dysfunctional class full of maniacs, psychos and misfits? No, it's not like your average Slice of Life show. Instead, what Koji Kumeta's Sayonara, Zetsubou-Sensei ("Goodbye, Mr. Despair", "mister" as in the salutation for a teacher) has become in its dark, disturbed humor and wisecracking background trivia is one of the most amusing Mind Screw series ever witnessed.

Nozomu Itoshiki, a man so unfortunate even his name can be read as "despair", attempts to hang himself. He is saved by Kafuka Fuura, the most insanely cheerful girl imaginable, who ignores his protests of despair and claims he is trying to make himself taller. Terrified, he runs from this beacon of bright light, and ends up at his new teaching assignment where, of course, the crazed happy girl awaits. The insanity only gets deeper from there...

The series happily subverts any schoolgirl tropes, as well as consisting of many more normal ones. It's also gorgeously animated—the most jaw-dropping scenes are often beautifully rendered. A second season, (Zoku) Sayonara Zetsubou Sensei ([Vulgar]/Continuation Goodbye, Mr. Despair) aired shortly after, meaning Nozomu had even more reasons to be in despair.

Following that, a set of three OVAs titled Goku: Sayonara Zetsubou Sensei (Prison: Goodbye, Mr. Despair) was bundled with the limited edition of volumes fifteen and sixteen of the manga, with the second one released independently, and a third season, Zan: Sayonara Zetsubou Sensei (Repent/Remainder: Goodbye Mr. Despair), recently finished airing. There's one final two-part OVA, titled Zan: Sayonara Zetsubou Sensei Bangaichi (Repent/Remainder: Goodbye Mr. Despair Outside Ground), which was bundled with the manga. According to messages in the opening of the second episode, this will be the last we see of Itoshiki-sensei. Having said that, it would hardly be out of keeping with the show (and its home studio) for this to turn out to be untrue.

The manga is out across the pond courtesy of Del Rey, so now you can despair in English! It also appears that Media Blasters has licensed at least the first season of the anime.

Sadly, the manga is confirmed to end in May, barring any delays.

Nothing to do with Goodbye, Mr. Chips (although the title was probably intended as a parody).

The following tropes have left us in despair!

Retrieved from "https://allthetropes.org/w/index.php?title=Sayonara,_Zetsubou-sensei&oldid=1842074"
Categories:
Cookies help us deliver our services. By using our services, you agree to our use of cookies.