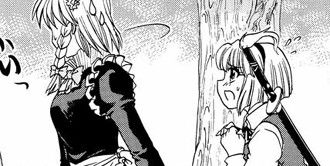 In its most literal translation, Onee-Sama (also parsed o-nee-sama or oneesama) refers to a highly respected older sister, (which can be troublesome when dubs treat it literally and it isn't). It's an extremely formal phrase, and probably is most commonly heard in period dramas.

In modern times, it has three main uses:

The Onee-Sama is always an older character, if only by a year. She's essentially a princess for the other characters with grace, beauty, and poise. The Onee-Sama often overlaps with Tall, Dark and Bishoujo, but usually comes in two flavors.

One kind is reflexively affectionate and doting, finding frequent excuses for giving hugs; the kohai is treated like a puppy, although the Onee-Sama might be anything from a humorous Dorm Mother to a Good Bad Girl.

The other is the 'serious' one, a girl who seems cold but enticingly mysterious; almost always the "alpha" schoolgirl. As sign that they view themselves as an idol to the rest of their coterie, the Ojou may demand to be referred to this way. When part of a romance she is likely to act possessively towards her object of affection to disguise her romantic feelings.

Mainly appropriated by the yuri fandom, it has become so closely identified with a particular brand of the Sempai-Kohai relationship that it is very difficult to use without carrying the connotations of attraction. Ironically, the increasingly overt behavior of Onee-Sama can probably also be attributed to shounen's use of this phrase.

Sometimes the term is rejected by its target, because she doesn't want to be the object of adoration and perfection that the term implies. If the romance element is present, a rejection of the term signals that she's straight and so does not return the affections of the girl referring to her as "Onee-sama".

Not to be confused with Oba-san.

Contrast with Cool Big Sis, who is less lady-like and more flirty. Often unapologetically so. Due to Values Dissonance, that is where non-Japanese media examples should go as well.

Examples of Onee-Sama include:

Retrieved from "https://allthetropes.org/w/index.php?title=Onee-Sama&oldid=1871999"
Categories:
Cookies help us deliver our services. By using our services, you agree to our use of cookies.