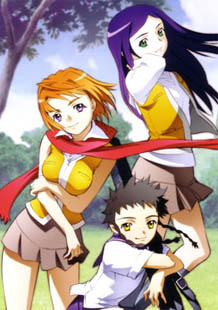 When Mai Tokiha and her little brother Takumi take up residence at Fuuka Gakuen, their new boarding school, Mai discovers that the prestigious academy is the center of some very disturbing paranormal events. Mai also discovers that she is a HiME -- supernaturally gifted with the ability to summon her "Element" (a set of strange artifacts that grant her great powers) and also bonded to a strange mecha-like creature called a CHILD. Mai realizes instinctively that the price of her new power is responsibility -- but there's an additional, far more terrible price as well.

At least she's not alone -- a secret organization called the First District has been gathering HiMEs to Fuuka Gakuen, at least nine of them; it seems the HiMEs are part of an ancient myth with a special destiny the First District wants to make sure comes to pass. But a powerful conspiracy based in America thinks it deserves to control their powers, and takes steps to make the HiMEs its own. And just when the HiMEs seem poised to become a unified force for good, an even deeper, darker secret about their purpose is revealed, completely and irrevocably altering the burgeoning connections between the girls.

One of the better anime to appear on Japanese television in the 2004-2005 season, Mai-HiME is well-written and is lushly and beautifully animated. Like Futari wa Pretty Cure, it seems intent on bringing a Post Modern sensibility to the aging Magical Girl trope. This it does with a sly misdirection, by first presenting what appears to be an "ordinary" Magical Girl show stripped of some of the trope's more "fairy tale" characteristics. (There are no fancy costumes or over-the-top speeches, no real transformation sequences, surprisingly few pieces of Stock Footage, and from the beginning, matters are significantly darker than the genre normally allows them to get.)

But once you've settled in to what appears to be just an unusual Magical Girl show, the tables are abruptly turned and everything you expected is changed. The true purpose of the HiMEs, the role of the Orphans, the very reason for their powers and what they have to do with them -- is nothing like what you expected. And unlike so many other Magical Girls, the HiME and what they do are not Invisible to Normals; some are in fact being influenced or manipulated by agents of the "mundane" organizations around them.

As one by one the HiME fall, the monstrous orchestrators of the carnival finally appear on the stage, leading to an apocalyptic final confrontation.

Mai-HiME was conceived as a multimedia project, spanning anime, manga and video game editions, all produced independently of each other with each one following a different continuity. The anime turned out to be by far the most popular imagining, but the manga has its followers. The video game, a Dating Sim created by the people behind Da Capo, was never released outside of Japan.

Followed in the 2005-2006 season by Mai-Otome, a completely separate series which still contains connections back to Mai-HiME. Another disparate series is Mai-HiME Destiny light novel series, which not only shifts the action to Hokkaido, but replaces Mai with a shiny new protagonist named Mayo Kagura and the HiME with MiKOs -- so, strictly speaking, it's neither "Mai" nor "HiME"...

Originally available in the US via bittorrented fansubs, but in late spring 2005 it was licensed for release in North America. As of summer 2006, it can be found in retail outlets in the US under the title My-HiME.

Tropes used in My-HiME include: