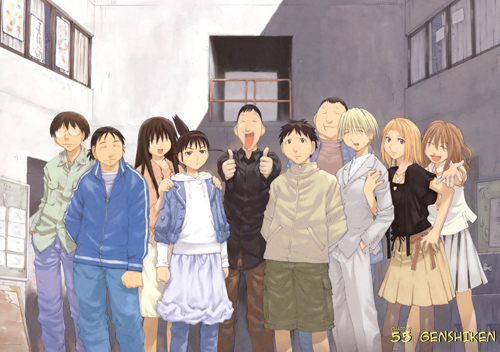 Genshiken, short for Gendai Shikaku Bunka Kenkyuukai (or, The Society for the Study of the Modern Visual Culture), is the story of the members of this ostensibly-useless club. Formed in the past as a sort of bridge between the manga, anime, and gaming clubs, most members of those three are at best indifferent to the continued existence of the Genshiken. The new extracurricular activities board has decided to close all clubs who don't hold any meaningful activities, the Genshiken is among them, and it's up to its members to do something that prevents the club from getting closed.

From obsessing over a favorite anime to buying and reading doujinshi, from playing one's first Dating Sim to attending a convention (the anime's "ComiFes" is a direct play on the real-life "ComiKet", which is held twice yearly), and many other things along the way, Genshiken puts the Otaku culture under the microscope for all to see.

Comparisons to Otaku no Video are nearly inevitable, though Genshiken is much more down-to-earth. (No creating a giant one-off Macross that can actually take off, for instance.)

Genshiken also had a companion anime (in the manga, it was a companion manga, naturally) called Kujibiki Unbalance. It was the series that the members of the Genshiken obsessed over, and was the Baker's Dozen for the series' disc release (one episode per disc). It turned out to be so popular that it is now being produced as a separate series in its own right.

A three episode OVA series was released with the Kujibiki Unbalance DVDs, much the same way as the three OVAs of the first Kujiun were released with Genshiken Season 1. A second full season was released in the fall of 2007 and covers some of the remaining plot from the manga, while simultaneously introducing original material, though this meant the entire manga couldn't be animated within the season.

In November 2010, the series is back up again as Genshiken Nidaime starting with Chapter 56, which was released as a bonus together with the Japanese Genshiken 2 box-set that covered the start of a new Genshiken headed by Oguie and continuing in Kodansha's Monthly Afternoon magazine. Originally Nidaime was intended as a limited-run continuation that was only to last a volume or two, but it has since been picked up for regular serialization and the volume collections are published as volume 10+ of the original series, instead of as a new title.

There’s a Spiritual Successor by the same author called Spotted Flower, chronicling the life a newlywed otaku couple, it may be connected to this series.

There is also a novel entitled Genshiken: Return of the Otaku.

Tropes used in Genshiken include:
Retrieved from "https://allthetropes.org/w/index.php?title=Genshiken&oldid=1800738"
Categories:
Cookies help us deliver our services. By using our services, you agree to our use of cookies.