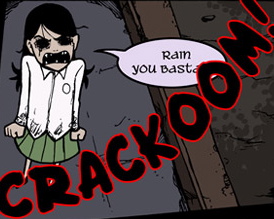 When a [DING!] character's [BOING!] words, usually [BAAA!] expletives, are [BOOM!] drowned out by a [ZAP!] artificial BEEEEP, or, more [TSEEEEER!] creatively, by a [BONG!] sound effect (e.g. a [HONK!] car horn or a [AAAIIEEE!] scream). Usually the [BEEEEEP!] words are [TWEET!] completely drowned out, but [SCREEE-BOOM!] sometimes the first [BLAM!] syllable is audible before the [MOOOOO!] sound effect [SLAM!] kicks in.

Normally used when a character is going to say something rude in a programme where the FCC (or other Media Watchdogs) will leap on it. It's the audio equivalent of Scenery Censor.

Strangely enough, the bleep effect often makes the joke funnier than if the swear word had actually been used (thus forming the premise of This Trope Is Bleep comedy). This is particularly true when it's used to cover up a Cluster F-Bomb. This is likely because profanity is often a mundane occurrence in real-life conversation, whereas loud incongruous bleeps are not. Unfortunately, it can have the same effect on scenes that are supposed to be serious.

Sometimes used in the service of The Un-Reveal, or to Cut a Curse Short.

Examples of Sound Effect Bleep include:

Retrieved from "https://allthetropes.org/w/index.php?title=Sound_Effect_Bleep&oldid=1945613"
Categories:
Cookies help us deliver our services. By using our services, you agree to our use of cookies.