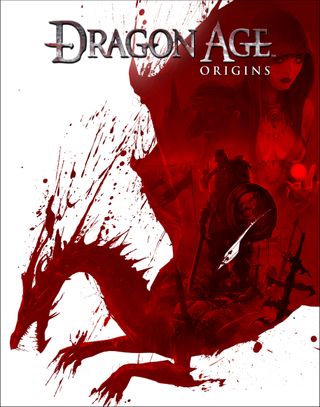 BioWare's Spiritual Successor to the legendary Baldur's Gate franchise, Dragon Age is a Dark Fantasy video game series set in the world of Thedas (originally an acronym for 'The DA Setting'), a Deconstruction of the Standard Fantasy Setting, drawing inspiration from sources as diverse as The Wheel of Time, A Song of Ice and Fire, and Buffy the Vampire Slayer and filled to the brim with Fantasy Counterpart Cultures and Black and Grey Morality.

In addition to the games, the series contains five novels. The first two are prequel, describing events leading up to the start of Origins. The next two are sequels, taking place shortly after Act III of Dragon Age II. The fifth delves into the history of the Grey Wardens and their association with griffons, and is expected to tie into Inquisition.

Their are also several comics in the franchise, as well as a P&P RPG developed by Green Ronin Games. A direct-to-DVD anime adaptation has also been release, to mixed reactions. Also released is a Webseries, Dragon Age Redemption, produced by and starring Felicia Day, who is a fan of the franchise.

Tropes used in Dragon Age include:

Retrieved from "https://allthetropes.org/w/index.php?title=Dragon_Age&oldid=1783912"
Categories:
Cookies help us deliver our services. By using our services, you agree to our use of cookies.