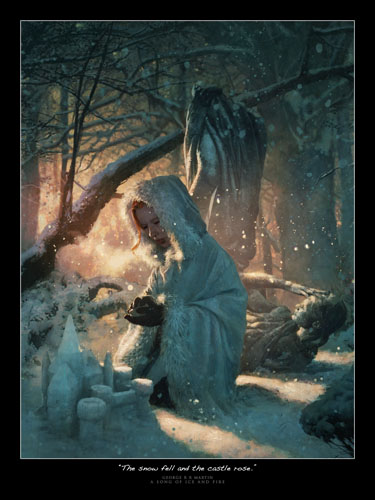 A bestselling Doorstopper epic fantasy series written by George R. R. Martin. The first book out of seven was published in 1996, and the series reached its fifth book in mid 2011. It has also spawned three prequel short stories, with a fourth in the works, and graphic novelizations of the first two short stories.

The series is primarily set on the continent of Westeros, in a world where the seasons can last for years. Fifteen years ago, lords Eddard Stark and Robert Baratheon and their foster father, Jon Arryn, rose up in rebellion and overthrew the Mad King Aerys Targaryen. They appointed Robert to the throne and drove Aerys' children into exile, breaking the 300-year dynasty of inbred kings. Now, Eddard rules his northern homeland and raises his own family in peace. When Jon Arryn unexpectedly dies, King Robert ventures north to name his friend Eddard as the new Hand of the King, the most powerful man in the Seven Kingdoms after the king himself. The honourable Eddard must leave his home to join the corrupt court in King's Landing and find the truth about Jon's death, unwittingly setting in motion a civil war. Meanwhile, the vengeance-mad children of King Aerys live in exile in the east and plot their return to the Seven Kingdoms across the sea.

Eddard's bastard son Jon Snow is sent north to The Wall, an ancient structure erected to keep out a mysterious race of ice demons known as The Others, and manned and protected by the order of warriors known as the Night's Watch. The Others have been unseen for so long that most living people think them a myth, and the once-honourable Watch has been reduced to an Army of Thieves and Whores a fraction of the size it once was. The Others are prophesied to return in The Longest Night, a Winter colder than any other, which will last forever if the Others should conquer Westeros. Naturally, at the time these novels are set, Winter is Coming, and it could not come at a worse time for a land which is soon to be engulfed in tyranny and civil war, and threatened by invaders across the sea.

The series has been received with great acclaim, with TIME Magazine even going so far as to brand Martin "the American Tolkien"--which is a bit of an irony, considering how different the two series are. The Switching POV allows for a wide variety of rounded characters, and there is arguably no central protagonist to be found. The series is located on the far end of the Sliding Scale of Idealism Versus Cynicism, with moral ambiguity very prevalent and few clear-cut heroes or villains. Despite the fantasy setting, actual magic is treated as rare and mysterious, generally spared for wham moments. Martin plays for keeps with his characters, and Anyone Can Die, no matter who they are, how safe they seem and how beloved by fans they are. There is no Saving the World scenario yet, either, but it is apparent that the separate plotlines are coming together in a much-alluded Myth Arc of great scope.

Martin's writing pace has slowed noticeably in recent years. There was a lengthy gap between A Storm of Swords and A Feast for Crows, and he continued to push back the arrival date for A Dance With Dragons. The series had a severe case of Schedule Slip; Martin and/or over-eager vendors would post a publication date and then miss that date with little-to-no explanation. Repeat this a few times, during which time fellow Fantasy Doorstopper writer Robert Jordan passes away, and the end result was a very worried fanbase. Confirmation of a release was finally made by George R.R. Martin himself, and A Dance With Dragons was released on July 12th, 2011 to spend exorbitant amounts of time on the NYT Best-seller list and mass critical acclaim.

The series has expanded into the "Dunk and Egg" series of Prequel short stories.

A TV adaptation aired for several years on HBO before concluding in 2019. Scripted by Dan Weiss and David Benioff, the show plans to do eight seasons, with A Storm of Swords comprising two seasons, the fifth and sixth seasons being a combination of A Feast For Crows and A Dance with Dragons but told chronologically rather than by splitting locations and characters as in the books, and all other seasons roughly corresponding to a single novel. It has received a very positive response, being renewed for a second season on the strength of the first episode's numbers alone.

A Table Top Role-Playing Game was licensed through Green Ronin and currently has three books released, a rulebook, a sourcebook, and a licensed adventure.

A cookbook, A Feast Of Ice And Fire and a map folio The Lands Of Ice and Fire have been confirmed. And the Fandom Rejoiced.

As the page for the novels is already considerable and ever growing, please enter the tropes found only in the live action series and video game on their own pages. The series' recap page currently covers the first book/season of the series/series, and incorporates bits from the books when appropriate.

For more information, see the character sheet, GRRM's "Not-a-blog" and Winter Is Coming, a central nexus for news on the TV show.

Martin has released a sample chapter for The Winds of Winter here. It appears to take place before the last few chapters of A Dance with Dragons.

Tropes used in A Song of Ice and Fire include:
Retrieved from "https://allthetropes.org/w/index.php?title=A_Song_of_Ice_and_Fire&oldid=1879304"
Categories:
Cookies help us deliver our services. By using our services, you agree to our use of cookies.