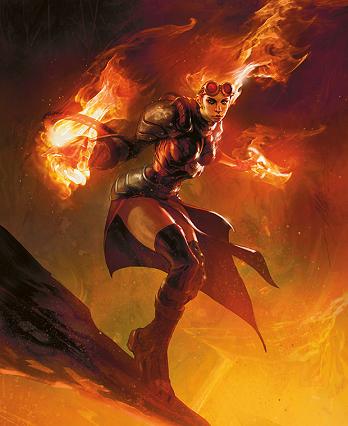 "Look into those flames, supplicant! Raise your head, look! Is that what you wish to hold, supplicant? Is the shaping of flames what stirs your heart? Know that flames can burn, and if you would learn their power, you must suffer their touch."
—Ignus's teacher, Planescape: Torment

Fire is one of the basic classical elements and usually the starter element from the Fire, Ice, Lightning trinity that console role-playing games love so much. It's a very popular power to use, mainly because it comes from the prettiest of explosions. This seems to work best when used on the undead, arrows, swords, and, against all common sense, even people. It even works when rolled up into a tangible ball and thrown!

People who are literally packing heat also tend to be fireproof and have a very high heat tolerance, as Required Secondary Powers. But sometimes, they aren't and are, in fact, just as vulnerable to their own flames as everybody else. Similarly, such characters may be Glass Cannons physically or emotionally owing to their element's reputation for extreme destruction and fragility.

A person with fire power often possesses - get this - a fiery personality. You could say that they are Hot-Blooded, or that the flame of passion burns within them. And who knows, maybe their burning anger powers their burning hands; it's certainly possible for it to make them literally burn from anger. They also tend to be redheads (or dye their hair). They may even give you due warning by being Fiery Redheads. If they're also a Pyromaniac, heaven help you.

Contrast with the natural foil, An Ice Person, Making a Splash, and Shock and Awe. Compare Kill It with Fire, and Having a Blast. May overlap with Magma Man (which could be perceived as a combination of this trope and Dishing Out Dirt). If you're caught in a literal firefight with these people, you should probably Kill It with Water. Frequently shown (off) via Finger-Snap Lighter and Blasting Time. Expect them to sneer at anyone using Cold Flames.

Examples of Playing with Fire include:

Chiri: Monstrousities of the body and hollow of soul! You deserve no pity! You shall be purged - IN FLAMES!