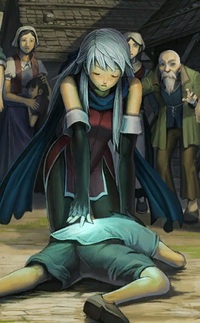 Where does it hurt?

Characters with a Healing Factor have the ability to heal themselves at an incredibly fast rate. Characters with Healing Hands, however, are kind enough to share the wealth.

These are characters who have the ability to heal others. Usually this involves placing their glowing hands on another person's injuries, quickly healing the victim's wounds. In other more fantasy-based stories, a character may specialize in healing magic and be the team's designated healing hands. This is the role often given to the White Magician Girl in RPGs or The Healer in MMORPGs. Their primary purpose is to make sure that their comrades don't get killed on the battlefield. More accurately, they're there to let the fighters nearly get themselves killed, and then patch them up back to fighting strength. (Which is the justification to Shoot the Medic First.)

Due to its support nature, these abilities are often relegated to characters other than The Hero, usually The Medic, but may also be applied to teammates or sidekicks (often The Chick, sometimes The Smart Guy). If the Hero does possess the ability, it will be just one of his many. When they aren't the hero, these characters usually have limited offensive power, and will optionally possess the ability to dole out Standard Status Effects to enemies, or to improve the fighting abilities of their teammates. Part and parcel of this package is the ability to cure poison and other such nastiness.

While some characters may possess healing abilities advanced enough to revive the dead, this trope does not apply to those who solely bring back the dead. That's a different animal entirely. Oddly, healing hands may not be able to remove scars or regrow limbs. Characters who heal by coming in contact or extremely close range with their patient may come from the imagery of real-life medics. Because, you know, its not like medics have healing guns, or something.

It should be noted that when a villain has a healing power, it usually involves sapping life from others to restore their own vitality. Often the reverse is true for a hero, who must pay a price, typically fatigue or life energy, to heal others.

Also, in the wise words of Mr. Welch, the person with Healing Hands should make sure he knows exactly where he lays his hands.

Oftentimes, this power is also coupled with "healing induced bloodstain removal and clothing fix," usually when the wound is caused either by bullet or stabbing weapon - it can usually be seen in the form of the bloodstain going slowly away (as if the soaking process was played backwards) and the clothes consequently appearing undamaged (i.e. without bullet holes etc.).

Not to be confused with the Hong Kong medical drama of the same name. See also Psychic Surgery for a more invasive form of magical healing.

Examples of Healing Hands include:

Retrieved from "https://allthetropes.org/w/index.php?title=Healing_Hands&oldid=1850551"
Categories:
Cookies help us deliver our services. By using our services, you agree to our use of cookies.