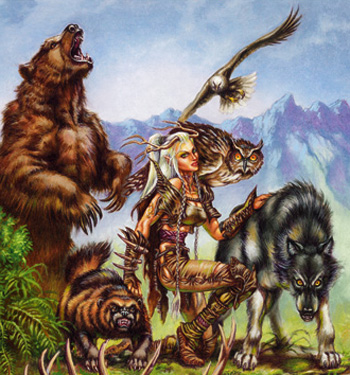 Originally druids were of the celtic priesthood. Of whom little is known, and most of that from the pens of their enemies. This, for centuries, has made them convenient for imaginary priesthoods, ranging from wise and patriotic resisters to Roman conquest, to bloodthirsty practioners of Human Sacrifice.

In modern days, this word is used for a nature-themed spellcaster that usually has flavour of priesthood. Commonly associated powers include:

Unlike classical priests and mages, druids have nothing to deal with dead and undead, demons and angels: their power roots in living things, including humans. Druids are usually associated with forests, but other versions are known.

Examples of Druid include:

Retrieved from "https://allthetropes.org/w/index.php?title=Druid&oldid=1494210"
Categories:
Cookies help us deliver our services. By using our services, you agree to our use of cookies.