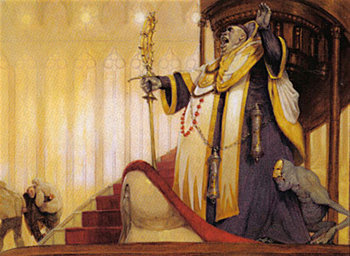 "That guy probably deserved it. Pay no heed, ye faithful."

Not even the most religious of places are safe from evil. In fact, the Corrupt Church is often portrayed as much worse than a simple Supervillain Lair or secular League Of Evil, because when even holy priests and ministers turn to the dark side, they can psychologically manipulate the masses with mere superstition, so what hope is there for society? Tends to be highly influential over political leaders to stress the church's power over everyone.

Major villains from the Corrupt Church can include Knights Templar, Sinister Ministers, Heresy-crushing Inquisitors and other typical ambitious villains using a convenient power structure for their own ends. The Creepy Cathedral tends to be their base of operations. If a work is set in the modern day, then the leader of the Corrupt Church will often be a televangelist, in which case the "straw Christian conservative" aspects will be ratcheted Up to Eleven. (Which is a bit ironic, since most televangelists hail from evangelical Protestant sects, which are almost by definition small-scale and wield little power compared to their Roman Catholic counterparts.) The Strawman Conservative may be a member, or even a leader, in one of these.

If the Corrupt Church is used for satire, the Crystal Dragon Jesus might appear.

Distinct from the Path of Inspiration because the Corrupt Church actually started out as a legitimate religion but has Gone Horribly Wrong. Unlike the Religion of Evil, an openly evil religion, the teachings may still be sound, and there may be good-hearted people in it yet—usually laity or low-ranking clergy, even a Good Shepherd—though neither of these can be counted on.

Compare with the Cult and Church of Happyology. Contrast with the Saintly Church. Contrast also with Church Militant, as the church is not evil per se, but at least badass.

No real life examples, please; calling real-life people "corrupt" is an extremely bad idea. Whilst there have been corrupt clerics and callous doctrines throughout history, every religion (and lack thereof) will have both defenders and detractors somewhere out there.

And remember - somewhere, your local deity is Face Palming.

Examples of Corrupt Church include:

Retrieved from "https://allthetropes.org/w/index.php?title=Corrupt_Church&oldid=1933394"
Categories:
Cookies help us deliver our services. By using our services, you agree to our use of cookies.