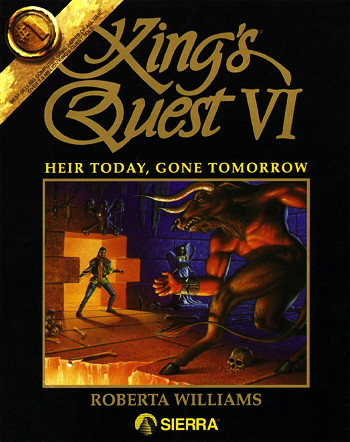 The game follows Alexander, son of Graham and prince of Daventry. Desperately in love with Princess Cassima of the Land of the Green Isles, Alexander journeys to her kingdom, but is shipwrecked en route. He wakes up in the Land of the Green Isles, a strange and magical archipelago with islands based off the Arabian Nights, Alice in Wonderland, Ancient Greece and other settings. Alexander quickly learns the place is not as friendly as he thought, and evil forces conspire against him as he tries to contact Cassima. His quest to find her takes him all over the land—meeting strange characters, facing terrible perils, and making puns. Lots of puns. And dying, that happens a lot too.

King's Quest VI is largely considered the best of the King's Quest series, due to its intriguing story, intelligent puzzles, lavish setting, and high production values (which include a CG introductory "movie" and professional voice actors, novel concepts for a game back in 1992). This may be be because most of the design was done by Jane Jensen, she of Gabriel Knight fame, rather than series starter Roberta Williams. A companion guide, called "The Guidebook to the Land of the Green Isles", was packaged alongside the game: it acted as a security feature by providing clues to otherwise impossible puzzles and fleshed out story background, adding to the story's sense of depth. Now if only the guidebook didn't get lost so easily...

Cassima: Oh, Alexander, I'm so happy that you've finally rescued me.
Alexander: Yes, my love.
Cassima: It's just too bad that you never avenged my murdered parents, or found the stolen treasures of the Green Isles, or uncovered the secrets of the Isle of Mist...
Alexander: Ah, yes, well, um...
Cassima: ...or ended the feud among the island rulers, or captured Alhazred's genie, or mastered the lost magic of the realm, or defeated the ruler of the Underworld...

Saladin: Since you cannot prove your point, I shall prove mine!

Alexander: [struggling for breath] Help me!!
Boy!Shamir: I think not! [[[Evil Laugh]]]