Everything About Fiction You Never Wanted to Know.
Jump to navigation Jump to search
/wiki/Duran Durancreator 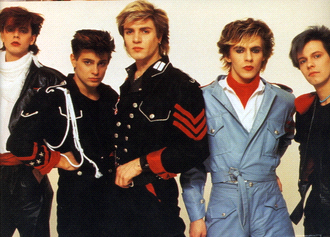 Duran Duran are an English pop rock band famous for a long series of popular singles, albums and vivid music videos, for which they've won two Grammy Awards. They were one of the most commercially successful of the New Romantic bands and a leading band in the MTV-driven "Second British Invasion" of the United States. They are named after the character of Professor Durand Durand from the 1968 movie Barbarella.

The group were generally considered part of the New Romantic scene, with other style-and-dance bands such as Spandau Ballet, Japan and ABC. In 1980, they recorded two demo tapes and performed in clubs around Birmingham and London. In late 1980, when touring as an opening act for Hazel O'Connor, the band attracted critical attention, resulting in a bidding war between the record companies EMI and Phonogram Records. "A certain patriotism" toward the label of The Beatles led them to sign with EMI in December. However, Nick Rhodes said in a 1998 interview with Deluxe magazine, that the band felt they were "appallingly ripped off" by the EMI contract.

Duran Duran were amongst the earliest bands to work on their own remixes. Before the days of digital synthesizers and easy audio sampling, they created multilayered arrangements of their singles, sometimes recording entirely different extended performances of the songs in the studio. These "night versions" were generally available only on vinyl, as b-sides to 45 rpm singles or on 12-inch club singles, until the release of the compilation Night Versions: The Essential Duran Duran in 1998.

Although they began their career as "a group of art school, experimental, post punk rockers", the band's quick rise to stardom, polished good looks, and embrace of the teen press, almost guaranteed disfavour from music critics. During the 1980s, Duran Duran were considered the quintessential manufactured, throw-away pop group. However, according to the Sunday Herald, "To describe them, as some have, as the first Boy Band, misrepresents their appeal. Their weapons were never just their looks, but self-penned songs." As Moby said of the band in his website diary in 2003: "... they were cursed by what we can call the 'Bee Gees' curse, which is: 'write amazing songs, sell tons of records, and consequently incur the wrath or disinterest of the rock obsessed critical establishment'."

Several of the band's contemporaries, including The Bangles, Elton John, Kylie Minogue and Paul Young, have named themselves fans of the band's stylish, uplifting pop. Simon LeBon described the group as "the band to dance to when the bomb drops". Successors like Barenaked Ladies, Beck, Jonathan Davis of Korn, The Bravery, Gwen Stefani and Pink have all cited Duran Duran as a key band in their formative years. The newest crop of performers to name Duran Duran as influences include Dido, Franz Ferdinand, Panic! at the Disco, Lostprophets (who took their name from the title of a Duran Duran bootleg tape), Goldfrapp and The Killers, and Scissor Sisters, who first came to wide notice while touring as DD's opening act.

To those of you who are in the know: LESTAAAAAAAAAAAAT!