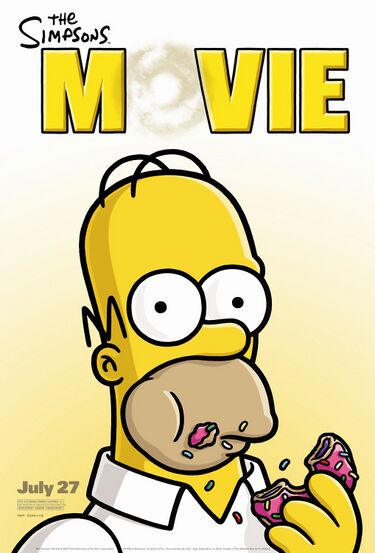 The Movie is a heavily expanded, one-shot story of a TV series usually meant for theatrical distribution. Oftentimes the film will be used to further the storyline of the show (see Myth Arc). However, usually there are other motivations for this, generally involving green slips of paper going into the pockets of film executives from the hard-working fanbase of a show. Although not always, The Movie tends to be an Ur Example or two to three hour long summary of the series or franchise in question, as well.

This trope primarily dates from before DVD, and occurred a lot during the 80s and early 1990s. A cinematic feature was considered much more important for a particular series or franchise at the time, than it would be now; although it can still sometimes occur.

Not all movies are The Movie; compare Non-Serial Movie and The Film of the Series. See also Made for TV Movie, and note that not all examples of The Movie are theatrical. (A Reunion Show, for instance, will often take the form of a movie.) Most anime movies, for example, are either non-serial adventures or the Arc or Myth Arc of the entire series compressed into the space of two hours. The latter frequently requires an Alternate Continuity to pull this off.

Frequently, The Movie will decide to raise the stakes (often changing the dynamic of the original work) so it can be a Big Damn Movie. It can also act as the Grand Finale. There is also the Compilation Movie.

If it's a series' first attempt at making one, it might even be called some variation of Title: The Movie. You know, in case you didn't realize.

For the inverse, a series based off a movie, see Recycled: the Series.

If you came here from a link in the Literature section of a page, see The Film of the Book and go back and correct the link. Then take a drink.

Examples are sorted according to the original source.

Examples of The Movie include:

Retrieved from "https://allthetropes.org/w/index.php?title=The_Movie&oldid=1951759"
Categories:
Cookies help us deliver our services. By using our services, you agree to our use of cookies.