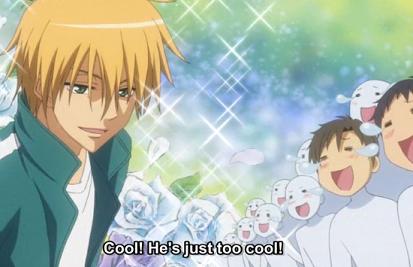 Usui and his harem of swooning fan...boys?

The male form of Hello, Nurse! and polar opposite of the Casanova Wannabe. A male character who is so good-looking and unintentionally charming that he becomes a babe and stud magnet, (the studs being either bisexual, or straight). Some of the other characters may question his sexuality and he'll keep them guessing, which results in Ho Yay... unless, of course, he is the love interest.

The only thing that saves him from becoming a Casanova or harem manager is his complete obliviousness to his power to make women's knees go weak and men's eyes glittery. If he's aware of it, which is more likely if he's the main protagonist, he'll treat it as more of a curse than a blessing and be a staunch Chaste Hero or Celibate Hero; or, if he's Big Boss, he won't really care one way or the other.

Compare the Chick Magnet, which is only for girls. Occasional cause is Dude Looks Like a Lady (if straight guys fall for him because they actually think he's a girl, that's Dropped a Bridget On Him) or The Dandy, though a polar opposite cause could be his sheer masculine appeal.

Has the Distaff Counterpart of Even the Girls Want Her, and for intersex characters, Everybody Wants the Hermaphrodite.

Can lead to the character becoming a Memetic Sex God. And it can also lead to the admirer(s) Jumping the Gender Barrier. Frequently overlaps with The Ace.

If his "admirers" include much younger characters as well as both sexes, he may be the series' Stacy's Mom.

Examples of Even the Guys Want Him include:

It's interesting to note that Kei/Megumi and Mikoto's similar experiences resisting unwanted male advances is what actually draws them together in the first place.

Translated into Modern English that says: "So hot even the guys want him, even guys who like hunting better than sex. But we're straight guys, so he must be a woman in drag!"

Retrieved from "https://allthetropes.org/w/index.php?title=Even_the_Guys_Want_Him&oldid=1920345"
Categories:
Cookies help us deliver our services. By using our services, you agree to our use of cookies.