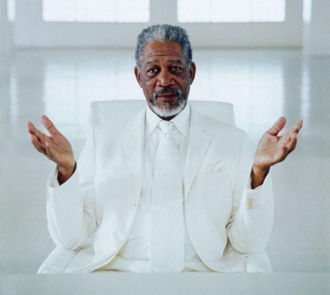 In Real Life, white is usually the color for summer clothing, given the quality of the color that reflects all spectrums of visible light away and - as such - offers some relief from the merciless heat of the summer sun. It is not considered an ideal color for most other occasions, given how easy white cloth is to stain and how clothes that absorb heat are desirable in most other climates.

Of course, in the world of fiction, concerns of practicality can be (and generally are) sacrificed for those of symbolism. The Man in White is a character who goes around dressed entirely (or predominantly) in white wherever he is. The reasons for this are not important, but what it signifies to the audience is; and it just so happens that in most cases, it signifies that the character is up to no good.

There's just something about a man in white that weirds people out. One possible explanation for this is that since conservative men's attire has been black for the longest time, looking upon a man in white creates a sensation not unlike a color-inverted image. Another one is that since white is also the color of snow and bone, an all-white ensemble evokes sensations of coldness and death.

In America, white suits have also come to be associated with Southern plantation owners, leading to the birth of the Fat Sweaty Southerner in a White Suit. As such, white clothing in American media can also be used to suggest pride, avarice, ambition, and questionable morality, which is why you can see so many mafiosos, drug lords, and corrupt corporate executives in such garb. For a more in-depth treatise on the subject, see this article.

As such, it isn't surprising to find that most men in white in fiction are unnerving at best and eldritch abominations at worst.

Of course, perhaps the reason it signifies that the character is up to no good is precisely because white is supposed to signify that a character is good, since that is the colour most associated - at least in the West - with an upstanding, honest, kind, or moral person; their clothing is as immaculate and pure as their soul. Having the Man in White be a villain turns this on its head and may evoke ideas of Most Definitely Not a Villain or Suspiciously Specific Denial. They pretend to be good either because they truly believe it or precisely because they are evil.

On occasion, the Man in White might actually be genuinely good, as Morgan Freeman in the pic demonstrates. Sometimes, its just Exactly What It Says on the Tin and you have a genuinely nice person who literally wears his goody-two-shoes-ness on his sleeve. Tropes Are Not Bad, and the Man In White need not be either.

Other times, the color white might simply come with the position: doctors and scientists have their pristine labcoats, priests and monks don long white robes, and some military officers get white dress uniforms. Since white clothing is expected of these characters, their appearance tends to impress (rather than unnerve) the audience and their fellow characters.

Compared to its Distaff Counterpart, the Woman in White, the Man in White is a much younger trope and not nearly as well established; as such, you'll find a broad range of characters and characterizations under the examples. All it really takes to be a Man in White is to wear white: all the added symbolism described above is just bonus.

Note that in Japan, men wear white tuxedos at their weddings because they think it looks Western (and it matches their bride's white wedding dress). The fact that Western grooms typically wear black is of no concern.

Examples of Man in White include:

Retrieved from "https://allthetropes.org/w/index.php?title=Man_in_White&oldid=1842127"
Categories:
Cookies help us deliver our services. By using our services, you agree to our use of cookies.