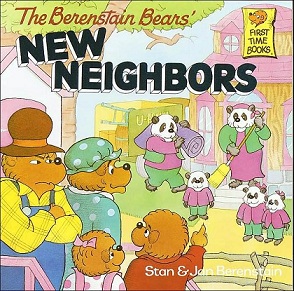 Note the Maoist-era Chinese garb on the kids. They pulled out all the stops.

A subset of the old trick of dealing with thorny issues through metaphor. Instead of having the hero encounter racism between, say, whites and blacks in the American Deep South, or between ethnic Czech and Roma in the Czech Republic, or between Ainu and Japanese, or any other sets of real-world groups, they encounter racism between two-headed aliens and three-headed aliens, or between Elves and Dwarves, or Werewolves and Vampires, witches and wizards, humans and super humans or humans and intelligent robots, or even robots and robots.

Note that this can also cover other types of prejudice; anti-homosexual sentiment, religious differences, and so on.

Related to Space Jews, in which the story has dubious racist overtones. Also related to Have You Tried Not Being a Monster?, when monsters are used as a metaphor for alternative sexual identity, rather than race. Fantastic Slurs are often involved, as are Zombie Advocates. Real Life weaselly lines like Some of My Best Friends Are X may feature. The undesired minorities may be rounded up inside a Fantastic Ghetto, they may also be the targets of Super Human Trafficking.

If the point of the story is to show the evils of racism, this trope can lead to a Broken Aesop if there are in fact good in-universe reasons to discriminate against a certain type of creature (say, because they need to drink human blood in order to survive, or they genuinely don't have free will or a sense of ethics like humans do).

Also note that Tropes Are Not Bad: most people wouldn't believe in a world where elves, dwarves, aliens, etc got along with perfect harmony, because their own experiences of different groups' interactions don't bear that out. Its called Fantastic Racism for a reason.

See also People of Hair Color, which can be another occasion for racism in fantasy.

Remember Square Peg, Round Trope when applying examples to this page.

No real life examples, please; those would be cases of real racism, which is outside the scope of this trope.

Examples of Fantastic Racism are listed on these subpages:
Retrieved from "https://allthetropes.org/w/index.php?title=Fantastic_Racism&oldid=1728521"
Categories:
Cookies help us deliver our services. By using our services, you agree to our use of cookies.