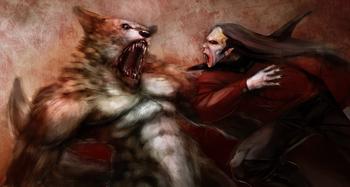 This is when you come back on a different day in the Lunar cycle.

In many ways, the legends of werewolves and vampires spring from similar sources, but recently popular fiction has fleshed them out, made them into species, and given them cultural traits.

Like Elves vs. Dwarves (or pirates vs. ninjas) they probably don't like each other. Wouldn't it be awesome if they fought each other?

And they did. And it was awesome.

Old World of Darkness popularized this trope, but there were some earlier examples. Compare Monster Mash, where they're cooperative, if not friendly. A subtrope of Cool Versus Awesome.

May result in a Vampire-Werewolf Love Triangle, the result of which will be a Hybrid Monster... or a childless marriage.

As a whole, this trope might be Newer Than They Think. In many legends and folklore that mention both vampires and werewolves, the two are not only not antagonistic, they are often connected, such as one belief that an improperly disposed of werewolf would actually come back as a vampire.

Examples of Fur Against Fang include: