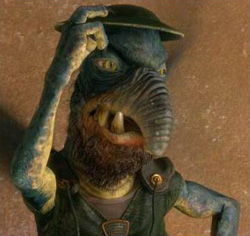 Watto you mean he's an anti-Semitic stereotype? It's not like he's a short, shady businessman, with a cap and a big nose, bad accent, dark curly facial hair, and tries to cheat his way out of... Oy vey.

The perpetuation in fiction of racial stereotypes... in space!

The Space Jew is an alien, monster, animal, or other nonhuman creature that embodies the worst aspects of a real-world racial, ethnic, or religious stereotype, whether Jewish, black, Asian, white or whatever. Sometimes it's intentional, sometimes it's subconscious and sometimes it's just an unlucky confluence of bad characteristics coupled with a naive creative mind. We're in no place to speculate.

But whatever the reason, the end result raises hairs on the necks of people worldwide as they wonder "surely that can't be intentional... can it?"

Also remember that Tropes Are Not Bad. The example doesn't have to be over-the-top or offensive to be an example.

Compare Fantastic Racism, Have You Tried Not Being a Monster?. See also Unfortunate Implications.

Don't mix this trope up with Fantasy Counterpart Culture, which deals with fantasy/sci-fi cultures that stand in for real life cultures but don't necessarily exhibit the stereotypes of whomever they are standing in for.

Not to be confused with Space Amish, Space Cossacks, Space Romans, or actual JEWS IN SPACE!

Examples of Space Jews include:

Retrieved from "https://allthetropes.org/w/index.php?title=Space_Jews&oldid=1935113"
Categories:
Cookies help us deliver our services. By using our services, you agree to our use of cookies.