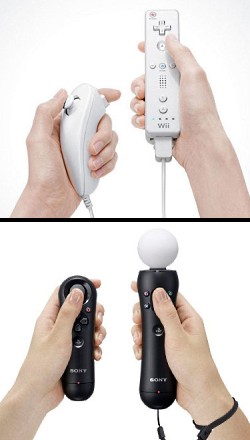 Above: The Wii remote. Below: The Playstation Move.

Whenever a work achieves enough success, there will be imitators. It doesn't matter if it's a cheap foreign knockoff or a major Hollywood production. It doesn't matter whether the writers are choosing to do this or the producers are. If they think they can make money ripping off a successful work, or at least something else in its genre, they will Follow the Leader. Thanks to Sturgeon's Law, this has the typical effect of flooding the market with a lot of inferior works. But not always.

Of course, the trailblazing work may itself not be original; in this day and age, little is. But it just manages to capture the public's interest (and their money), and it is this magical moment that studios strive to duplicate, after the fact.

May result in the resurrection of a previously successful franchise in the same genre; X-Men and Spider-Man, for instance, led to Batman Begins and Superman Returns. These may or may not become Lost in Imitation.

If the imitators have enough of the spark to become successful and spawn imitators of their own, a whole new genre may be created.

Note that this phenomenon is not limited to recorded visual entertainment. The music industry in particular is just as prone to "trend-hopping," as are video games and, really, any entertainment medium. Also note that while the text of this article deals primarily with American institutions, the concepts herein apply equally in all parts of the world.

It's also interesting to note that Follow the Leader may result in its own particular form of Narm. Just try dressing your characters up in black leather longcoats and using Bullet Time in your action sequences nowadays without becoming Matrix knockoff Snark Bait.

Another potential problem is Misaimed Fandom. Instead of looking at the core reasons why the original may have been so popular and basing their follow-up on that, such as interesting, three-dimensional characters, a unique, interesting plot and genuinely witty or moving writing and acting, the creators following the leader only tend to focus on the superficial stuff on the surface—it's got pirates in it; pirates must be popular, so let's make a pirate movie! -- and thus completely miss the point of what made the original great in the first place.

So why bother ripping off things at all? Well believe it or not, it's rare for a ripoff to outright flop. And once in a while, they can pay off big time. As in some works actually manage to replicate much of the success of the leader, often by original elements that give the followers their own quality, or even more rarely, by highly derivative works that manage to maintain the quality of the leader. The latter usually happens with video games (especially if the leader is not on that system and the follower is a successful answer to it). Anyway, what's the point in innovations if nothing else is going to take advantage of or even build on it?

Examples of Follow the Leader are listed on these subpages:

Retrieved from "https://allthetropes.org/w/index.php?title=Follow_the_Leader&oldid=1796326"
Categories:
Cookies help us deliver our services. By using our services, you agree to our use of cookies.