Trilogy of films starring Tobey Maguire as the Marvel Comics superhero Spider-Man. All were directed by Sam Raimi of Evil Dead fame. Pretty highly successful in both the critical and box-office record departments (save for the third movie's mixed reviews and fan backlash). Three movies have been released. The franchise was rebooted with The Amazing Spider-Man in 2012 and rebooted again (as part of the Marvel Cinematic Universe) with Spider-Man: Homecoming in 2017. 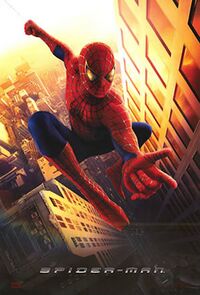 The first movie is an origin story, telling the tale of Peter Parker, a nerd who is bitten by a genetically-engineered spider and gets the powers of the arachnid - web shooting, high jumping, wall-adherability, enhanced strength/endurance and sensing vibrations in the air. At first he attempts to use these powers for profit, but when his actions accidentally lead to the death of his Uncle Ben, Peter decides to use his abilities to fight injustice, under the name Spider-Man. This comes in handy when the father of his best friend, Norman Osborn, becomes the villainous Green Goblin after using a performance-enhancing chemical vapor that grants him super strength, but also makes him mentally unstable and dangerously psychotic.

Tropes used in Spider-Man (film) include:

Retrieved from "https://allthetropes.org/w/index.php?title=Spider-Man_(film)&oldid=1891965"
Categories:
Cookies help us deliver our services. By using our services, you agree to our use of cookies.