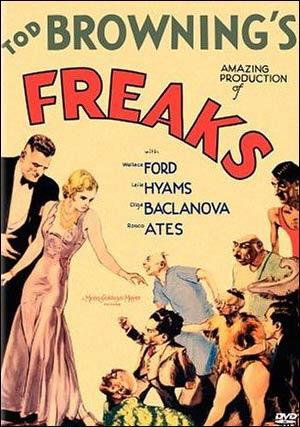 Freaks (1932) is a horror film about sideshow performers, directed and produced by Tod Browning and released by Metro-Goldwyn-Mayer, with a cast mostly composed of actual carnival performers. The film was based on Tod Robbins' short story "Spurs". Director Browning took the exceptional step of casting real people with deformities as the eponymous sideshow "freaks," rather than using costumes and makeup.

Browning had been a contortionist in a traveling circus in his early years, and much of the film was drawn from his personal experiences. In the film, the physically deformed "freaks" are inherently trusting and honorable people, while the real monsters are two of the "normal" members of the circus who conspire to murder one of the performers to obtain his large inheritance.

One bit of influence the film has had: The "Gooble gobble, we accept you, one of us" chant with which the freaks welcome Cleo (not that she appreciates it) was worked into the song "Pinhead" by The Ramones.[1]

Not to be confused with Freaks and Geeks, despite the etymology of the word Geek.

Freaks is the Trope Namer for:
Tropes used in Freaks include: