Even Evil Has Standards 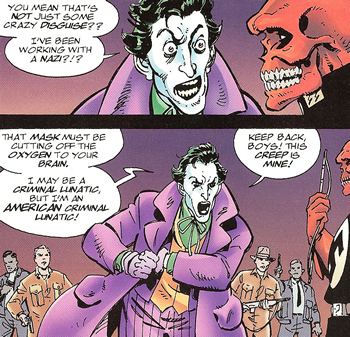 Because even when you're psychotic, you still have to protect the American way.

One of the easiest ways to highlight just how bad something or someone evil is: have an otherwise-remorseless villain reject it.

It's often used in a Very Special Episode or as a way for a writer to say "I'm not even going there", or alternatively to show that a new villain is really bad if even Doctor Annihilation thinks his haircut is disgusting. This can be strange if handled badly, leading to confusion over why a criminal thinks shooting a single orphan is worse than killing every single orphan in the Throwaway Country, and may unintentionally edge into Blue and Orange Morality. Why, after all, should a serial killer be upset by petty theft, or a rapist and sexual abuser be upset by prostitution, or...? Another way that it's used is to keep a villain safely on the "still sympathetic" side of the Moral Event Horizon; give him something that he simply will not do.

The common uses are a killer or villain who spares a certain target, most often children, a villain who refrains from sexually-based offenses, or a murderer-rapist who Wouldn't Hurt a Child, or a villain who might murder, extort, run protection rackets, run prostitutes, and so on, but doesn't deal in drugs (we're looking at you, Valentin Zukovsky). Therefore, it is fine for our hero to work with them. Especially against the "real" villain, who, naturally, does do those most heinous of things because, As You Know, Drugs are the only thing that make you a Complete Monster.

The trope title is frequently spouted by the Noble Demon, in order to justify his evil self-identification.

I Gave My Word is another common variant, which may let the heroes agree to Combat by Champion. Some villains may maintain their standards through use of a Heroic Villainous Vow.

Can lead to an Enemy Mine if the evil is another villain. Can also lead to a Pet the Dog moment. Can contribute to making an Anti-Hero or Villain Protagonist A Lighter Shade of Grey than their enemies. Can also make it so that a conflict where both major factions are malicious has someone for the audience to root for. Generally will Never Hurt an Innocent.

In comedy, often used to frame a Take That against a real-life action or person that the villain is "too good" to associate with. Contrast Moral Myopia, where the 'standards' apply only to the villain's allies and Arson, Murder, and Admiration where the eviler one is the better. This trope is one of the distinguishing differences between most villains and The Unfettered. If your story takes place in a Mob War where one side is slightly better than the other, it's most likely because the "good" side has standards.

Compare and contrast Pragmatic Villainy, when the villain's refusal to partake in the abhorrent act is far more selfish (or in the case of a group of villains against a single one, group-beneficial); Even Mooks Have Loved Ones, where minions defect to protect a loved one from their boss; Evil Is Stylish for cases where it's not what is done but rather how it's done that the villain has standards for; and Family Values Villain for where the standards are very . . . old fashioned. Often the deal with many Lawful Evil villains, but sometimes not. Can occasionally be the cause of a Break the Badass moment, when the Badass in question is the bad guy.

A Sub-Trope of Everyone Has Standards.

Truth In Television - whatever atrocities some dictators, mob bosses, serial killers, child molestors etc. have committed, so far we don't know any human being who really has had no standards or redeeming qualities at all. (But mind that their standards can be pretty weird and incomprehensible to outsiders, especially if Utopia Justifies The Means is involved.)

Can even involve Conscience Makes You Go Back. See also Evil Virtues and Villainous Valour, for good traits and virtues that villains commonly practice. The inversion of this trope is Well-Intentioned Extremist and Utopia Justifies the Means, when it turns out that goodness is willingly crossing the Moral Event Horizon. No Real Life Examples, Please, Godwin's Law notwithstanding.

No real life examples, please; calling real-life people "evil" is an extremely bad idea, even if those people are Adolf Hitler or Benito Mussolini.

Examples of Even Evil Has Standards are listed on these subpages:
Retrieved from "https://allthetropes.org/w/index.php?title=Even_Evil_Has_Standards&oldid=1799024"
Categories:
Cookies help us deliver our services. By using our services, you agree to our use of cookies.