My Friends and Zoidberg 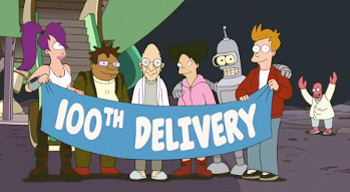 A standard comedy trope which, at its core, takes the form:

It is often expanded to mention two or more groups that form a supergroup:

In either version, Bob is already expected to be among the group(s) in question, but is singled out as if he's not, usually at Bob's expense; "Bob" may be anyone, including the Butt Monkey or an Acceptable Target.

This can be Played for Laughs in cases where it's literally impossible for Bob not to be a member of the groups mentioned.

It can also be used to deliver a Stealth Insult: "We welcome members of all benevolent professions, as well as lawyers." Or, inverted, it can even deliver a compliment: "You morons, and Bob."

Compare: And the Rest, Snub By Omission, Bait and Switch Comparison, I Take Offense to That Last One, Guilt by Association Gag, Ladies and Germs, and Insult to Rocks. Compare and Contrast Especially Zoidberg.

Examples of My Friends and Zoidberg include:

This happens more frequently the more south you go (in which Hockey is cropped out entirely or replaced with NASCAR). Don't say this the farther north you go though, especially in Canada.

Retrieved from "https://allthetropes.org/w/index.php?title=My_Friends_and_Zoidberg&oldid=1859673"
Categories:
Cookies help us deliver our services. By using our services, you agree to our use of cookies.