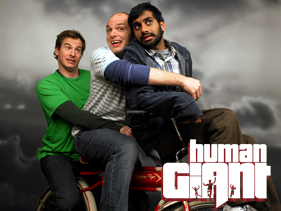 Human Giant was a Sketch Comedy show that ran on MTV from 2007 to 2008 and featured Aziz Ansari (better known as RAAAAAAAANDY from Funny People or Tom Haverford from Parks and Recreation), Rob Huebel and Paul Scheer, as well as a revolving door of indie-comedy guest stars, including David Cross, Brian Posehn, Patton Oswalt, Nick Kroll, Casey Wilson and June Raphael. The show itself consisted of weird, funny videos that often crossed the line twice and sometimes folded back into themselves.

Tropes used in Human Giant include:
Retrieved from "https://allthetropes.org/w/index.php?title=Human_Giant&oldid=1336498"
Categories: