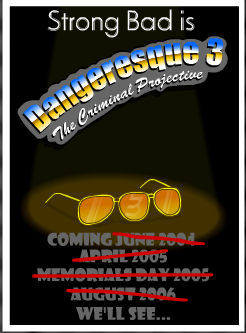 The state wherein an announced creative project becomes stuck at the preparation stage for years.

The term originates in the film industry, referring to films mired in pre-production without casting or production ever beginning. A common occurrence with book adaptations and other licensed materials, as legal squabbles over rights, Executive Meddling, budgetary problems, and differing artistic visions keep the project from going before the cameras. And even if it does make it to the shooting stage, a Troubled Production can easily derail it and throw it right back here.

Development Hell becomes a sort of self-reinforcing feedback loop over time—as one director gets fed up and quits, the project is assigned to a new director, who orders a new screenplay with a new vision, which results in producers demanding changes, wash, rinse, repeat etc.

Projects in other media can sink into similar cesspits. The Video Game equivalent of this phenomena is Vaporware. Compare What Could Have Been. This can overlap with Schedule Slip when it comes to miniseries or other works that are released in installments but could also be considered parts of a single as yet unfinished work.

For those examples which finally became real, after years, or decades in some cases, look at Saved From Development Hell.

Examples of Development Hell include:

Games Workshop recently started work on updating older books, which thankfully will see a resurgence of the forgotten armies. However the Sisters of Battle are notable in that while they're not as old as the Dark Eldar, they might very well have to wait quite a bit longer given that they're getting a Magazine Codex (which usually means development on them has halted and they're just getting lip service in the meantime). Even more notable is that the army is so old, they're the only ones who still require you to use metal models for the entire army (every army, even the Necrons and Dark Eldar, had plastics for troops. Sisters are not so lucky).

This page will be finished, any year now. What do you mean, it's "outdated"?

Retrieved from "https://allthetropes.org/w/index.php?title=Development_Hell&oldid=1842942"
Categories:
Cookies help us deliver our services. By using our services, you agree to our use of cookies.