No Celebrities Were Harmed 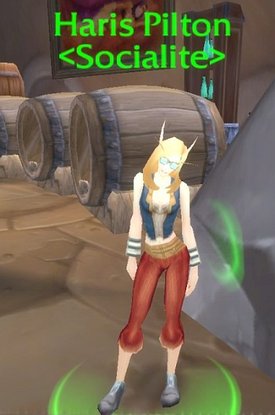 Sometimes a character's entire shtick will be that he or she is a thinly disguised imitation of some celebrity somewhere. The more blatant examples will often have a parody of that celebrity's name. This can be done for various reasons, such as to serve as a homage and/or parody, to make a point using the character (see picture to the right), or simply because the writers think that it would be cool. Though some consider it done because the writers are out of ideas.

The most common impressions to hear in cartoons are Arnold Schwarzenegger or Sylvester Stallone for tough-guy characters, Peter Lorre for creepy characters, R. Lee Ermey for Drill Sergeant Nasties, Paul Lynde for Flamboyant Gay characters and Mae West for vamps.

May double as a Parental Bonus, in a program aimed at kids.

As noted The Ahnold is a common form of this, as are Mock Cousteau and Mr. Alt Disney.

Compare Ink Suit Actor, where a celebrity voices an animated caricature of himself. Comic Book Fantasy Casting is a much milder version of this, where a real actor or other celebrity is used as a guide for a character's appearance but with no attempt to caricature their persona. See also Lawyer-Friendly Cameo, No Communities Were Harmed, and Adam Westing. Tuckerization is the inverse. If it's a fictional character that's being imitated, then it's an Expy or Captain Ersatz. Does not apply in the case of adaptations of live-action source materials, where the character designs are obliged to be based on the real actors.

Examples of No Celebrities Were Harmed include:

Retrieved from "https://allthetropes.org/w/index.php?title=No_Celebrities_Were_Harmed&oldid=1951262"
Categories:
Cookies help us deliver our services. By using our services, you agree to our use of cookies.