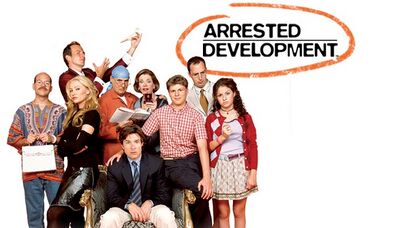 Arrested Development is a FOX Sitcom, debuting in 2003, which was hailed by critics (and Emmy voters) during its initial run as the best new comedy in years, but ended up becoming the best TV show nobody was watching.

The show -- a sitcom with no Laugh Track -- follows the farcical exploits of a wealthy family grappling with the loss of their fortune as the family patriarch is arrested for numerous dubious dealings involving the family business. The show's tone is dry and fast-paced, tempered with a voice-over documentary-style narration[1] and coupled with Running Gags, nested flashbacks, and other complex narrative structures.

Michael Bluth is the Only Sane Man in a family that doesn't know how to live frugally; he is trying to keep the company afloat and the family together, but his siblings live their lives on a whim. His older brother Gob (George Oscar Bluth II -- pronounced "jobe", like the biblical Job) is a mostly incompetent magician who performs illusions. Michael's twin sister Lindsay is a fair-weather activist for whatever cause happens to catch her attention at any given moment; her husband, Tobias, is a former psychiatrist turned aspiring actor (and is in denial about his obvious homosexuality). Michael's younger brother, Buster, is a bizarre Man Child who still lives with his mother, Lucille (who is constantly drinking and critical of everything and everyone). Michael's father, George, is enjoying his time in prison. Michael's son, George-Michael, and Lindsay's daughter, Maeby, frequently steal the show; the rest of the family is ignorant of the UST between them.

Arrested Development garnered critical acclaim (and Emmy awards) during its run, but it struggled with low ratings and numerous schedule changes. While it's considered Screwed by the Network by some (a common occurrence with FOX shows), the show did manage to get three seasons and fifty-three episodes under its belt before ending (rather than being cancelled). Series creator Mitch Hurwitz was offered the opportunity to move the series to Showtime, but he declined, since he felt the show had run its course.

A movie based on the series, which will involve the show's original cast and many of the same writers and producers, is currently[when?] in production. An abbreviated fourth season -- consisting of Days in the Limelight which will bring the audience up to speed with the five missing years of the family's lives -- will be produced to lead into the movie. The new season and the movie are to be filmed back-to-back in summer 2012 with a projected early 2013 release. In an interesting twist, the fourth season will be exclusive to Netflix.

The show has a Wiki on Wikia in addition to the in-universe-styled fansite The Balboa Observer-Picayune. The wiki with the most comprehensive coverage of Arrested Development, however, is often Wikipedia itself.

There is a Recap page listing the show's episodes and the tropes used in each of them (still in development).

Arrested Development in general provides examples of the following tropes:

To be sorted alphabetically into the main list above:

Retrieved from "https://allthetropes.org/w/index.php?title=Arrested_Development_(TV_series)&oldid=1912342"
Categories:
Cookies help us deliver our services. By using our services, you agree to our use of cookies.