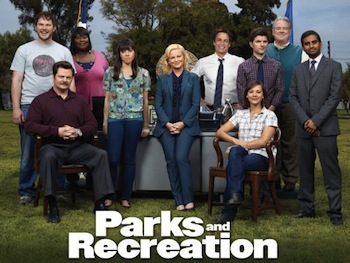 The main character is Leslie Knope, played by Amy Poehler, a Pollyannaish Workaholic who works as Deputy Director of the Parks Department. See here for further information on the characters. The very short first season focused almost entirely on Leslie's efforts to cut through the red tape to turn Lot 48, a giant pit created as part of an abandoned construction project, into a park. This storyline was continued in subsequent seasons, but diminished in importance as the show explored other facets of the characters' lives, both professional and personal. The pit is filled in in season two, but as of the end of season three is still not a park.

Parks and Rec was actually originally conceived as a Spin-Off of the U.S. The Office, but in the end its only tie to that show is the format and the presence of Rashida Jones in the cast (as a different character).

Tropes used in Parks and Recreation include:
Retrieved from "https://allthetropes.org/w/index.php?title=Parks_and_Recreation&oldid=1942850"
Categories:
Cookies help us deliver our services. By using our services, you agree to our use of cookies.